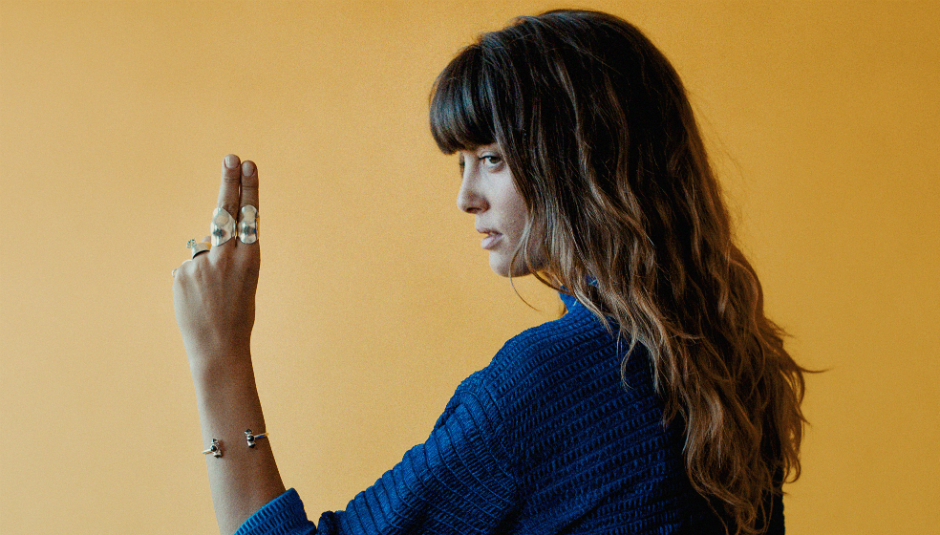 “I have this idea of giving people moments of thought and inspiration, and at the same time offering escapism and fun," says singer and producer Noga Erez. She’s just signed to City Slang Records and released her first single on the label, ‘Dance While You Shoot’, a heavily percussive track that showcases Erez’s sophisticated and uncompromising approach to pop. She wants to get you thinking, but also get you dancing.

On ‘Dance While You Shoot,’ metallic beats combine with her incendiary lyrics, which deal with the conflict of sometimes needing a government to help ensure a person’s basic needs, but that also keeps people in the dark about the real issues affecting them. While it might easy to trace a line from Erez’s life growing up and living in Tel Aviv to the track’s themes, she makes sure to put a globally-relevant spin on everything she does, looking outward to the world when nations appear to becoming increasingly insular. The result is an explosive introduction to her idiosyncratic yet bold musical universe.

In advance of her first-ever dates in the UK later this month, DiS caught up with Erez to ask more about her background, the Tel Aviv music scene, and mixing politics with escapism.

DiS: How did you first get into singing and producing?

Noga Erez: Singing started at a very early age for me. It was just something I did, something that made me feel good, mainly because that was the most natural thing to do with my affection for music. At a very early age I started taking singing lessons and became more and more interested in finding different ways of expressing myself through music, which led me to piano, percussion composition, and song writing. When I was at a stage of wanting to record my music, I began to explore the world of production. When I met my partner, Ori Rousso, he taught me how to use Ableton live and from there I started messing around with sounds and exploring effects.

Is there quite a strong underground scene of producers in your hometown of Tel Aviv? Is there anyone you’d recommend that we check out?

Oh yes, there's a vivid underground music scene going on in Tel Aviv. It has a weird vibe to it because of Tel Aviv being such a small city. As a musician, you practically know everyone in the scene, so watching a musician you appreciate play live and meeting them at the grocery store the morning after is likely to happen. One of my favourite local artists is a band called 3421.

Who have been the biggest influences on you and how do you think they’ve shaped your music?

The truth is that I'm lucky enough to work with my biggest musical inspiration, Ori Rousso. He has taught me a lot about music and has played a huge role in my musical journey. Not to mention he writes, composes, and produces my music together with me.

How did you first meet Ori Rousso and start working with him?

I was hired to play keyboards for a project and they wanted me to use Ableton live for the shows. The production assistant was Ori. Teaching a technophobic keyboardist and backing vocalist to use this software was not part of his job. So at first he was kinda annoyed, but it was so much fun and inspiring to work and hang out together. Eventually, I left that project and we became partners in everything...

Your new single ‘Dance While You Shoot’ is about the contradiction of needing a government to help ensure your basic needs, but also keeps you in the dark about the real issues affecting you. Where did the initial inspiration for the track come from?

This was actually a breaking point for me, not something that just came out of blue. It was a build up to one of the most infuriating and stressful situations I have experienced in years. Not long after, the same Prime Minister was re-elected and a lot of corrupt shit was flooding the media. I felt so frustrated and disappointed to once again see nothing had changed. Still as corrupt as it was before. The urge to just break something or punch someone in the face arose from a deep part of my body. I've realised how violence evokes violence, how desperation is a circle that can daze even the most peaceful human beings. I've realised that the aggressive feeling that was in me was something I could channel in more positive and productive ways, to take that negative energy and use it in constructive and artistic forms. Even doing something as simple as taking a walk, running, or dancing helped to gain clarity. This realisation gave me the idea to write this song.

Do you want your music to illuminate issues that others might not be speaking of? If so, is there anything in particular you’d want to shed more light on?

I make music, first and foremost, to make music. But after some time I've realised how much music has affected the way I see the world, the way I process issues in my life. The way songs have made me aware of things that maybe I was not aware of before. While I have a very clear vision of what I would like my music to shed light on, I am also trying to be as personal as I can in that moment, to give my perspective and not an opinion. To encourage people to search and think, but not to tell people what to think. As a person and as a songwriter, I would like to be very clear and precise with the message that I deliver and I feel like I need to spend more time writing, reading, and basically living in order to do that responsibly.

The video for ‘Dance While You Shoot’ is quite stylised and uses colour really well to give a sense of implied violence. What were the inspirations behind the video?

The idea of using the colour pink to soften the disturbing images was inspired by photography works from Richard Mosse's Infra series. It’s a series that shows soldiers in the Republic of Congo shot through an infrared film and images from the 2011 Kampala riots in Uganda, where protestors were sprayed with pink paint.

While it’s quite stylish, the images for the ‘Dance While You Shoot’ video reflect the political edge to the song. Is the visual image you present just as important to you as the music itself?

I never imagined I was going to make a video like that when I wrote the song. But there came a time when the song began to feel more and more complete when I started imagining it in video form. It's a part of the age we live in; music is combined with visual art and, in a sense, that cannot be separated anymore. Combining the different forms of art is something I always wanted to do and I was grateful for the opportunity to do it with this song. Music means more than anything to me and it is still the language that I understand best. But what Zhang + Knight, the directors of this video, managed to do is to take the "political” theme of this song and turn it into something more global, something that shows that violence has many faces, and we all experience it in different ways.

Are the political aspects of your music inspired by your experiences growing up and living in Israel, or is your worldview a lot more globalised than that?

While your work is obviously pretty political, it’s also danceable and quite fun too. How important is it to you to get the balance right between that thoughtful edge and escapism?

It's extremely important to me that the music I do can live between those two worlds. Music has been an important tool for me when I wanted to escape reality and when I wanted to face reality. I am aiming to create a moment that combines the two because I think there's something very genuine about this mixture. There's reality and there's an experience and they can be combined and yet completely separated when you put them into a musical piece.

You’re playing your first ever dates in London soon. What can we expect from your live show?

The live show is a very energetic and intense. Playing the music live helps me to relive the songs. I put 110% into all my shows. Not to mention my drummer is the most incredible rhythm beast and an amazing performer.

You’ve just released ‘Dance While You Shoot’, which is your first single for City Slang, but what plans do you have for 2017?

We have more songs and videos coming, and more touring, and more of the two, and repeat. That's the loop basically. Full length coming in 2017!

Noga Erez is supporting Roosevelt at XOYO in London on 23 November, and will perform a headline show at Paper Dress Vintage, also in London, on 24 November. For more information, visit her official website.

A Glimpse Of The Future: DiS Does Pri...