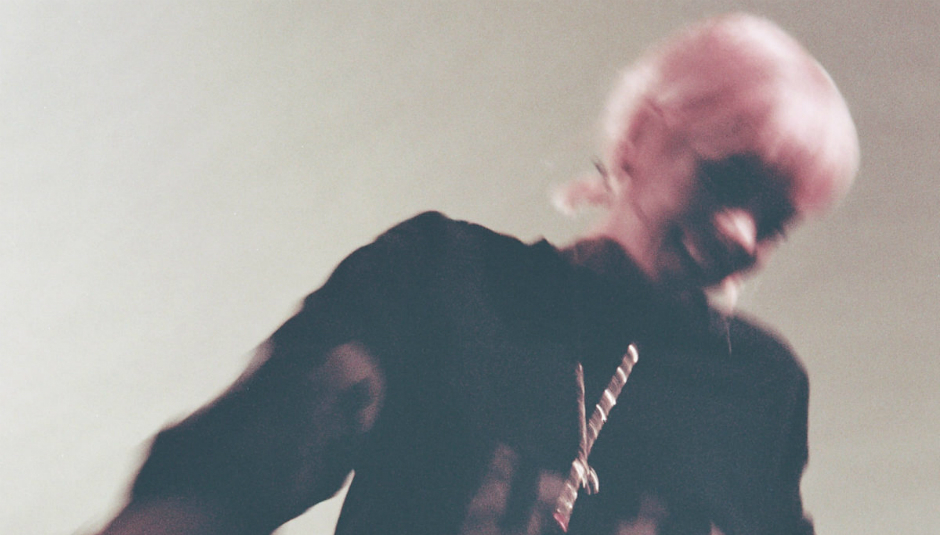 “Lily Allen?” said a friend earlier this week when I told her what I was doing this evening. “God, I’ve not thought about her in ages.” And then as if in answer suddenly she’s everywhere, her image staring out from newspaper stands and daytime TV shows and screens of three separate people opposite me on the train. I’m wondering whether I’m allowed to read The Guardian’s interview or whether that would break the whole “blind review” conceit when two of them start discussing it, and to be fair, Allen’s life these last few years does sound like it’s been interesting: heck, by the time this listen-through comes around I’m kinda excited to find out whether that’s translated musically.

“I feel like I’m under attack all of the time / I’m compromised / My head can’t always hold itself so high”, sings Allen at No Shame’s start, echoing the themes of conflict, vulnerability, and defiance that characterise the press appearances. It’s pretty damned confessional, disarmingly so, sweet melodies weaved atop melancholy synths and plunging bass, and whilst the My Sad Life narrative is already threatening to wear thin three minutes in, this is alright – not quite Lemonade, but not horrific either.

Ugh – anything ‘feat.’ is immediately suspect, and whilst there’s a pleasing Massive Attack sound to this track’s first half most of Giggs’ rhymes are annoyingly poor. Once he’s gone the song evolves into slick dark pop, exploring Allen’s efforts to keep herself from falling back into addiction. Again, it’s nice if pretty narrow – the best pop connects us to something deeper, universal, but so far this is too insular.

‘What You Waiting For?’

We’ve had Motherhood and Relapsing: from the opening lyric, “Since we separated” I guess we can tick off Marriage on what’s fast becoming a rather wearying bingo. I drift off for a while and notice that someone’s messaged to ask why I’m listening to Lily Allen (thanks Spotify) and I try to write back something positive.

Something about an open relationship? Jealousy? I’m not sure music is supposed to be about guessing the plotline, but then there isn’t a whole lot else going on here – it’s pleasant enough and the guest vocals are a nice counterpoint to Allen’s upper register, but it’s not even finished and I can feel it passing through without forming even the beginnings of a memory.

I’ve just realised there are FOURTEEN tracks on this album. This one’s about some other sad time. God, I miss Portishead. I was trying to stay sober for this because #journalisticintegrity or something but fuck it: I need a drink. This isn’t terrible, but sounds a little bleak and one note. It does have a pleasant enough melody though, and her echo-y vocals are nice.

There’s no ‘feat.’ listed on this one, but there’s a sneaky rap at the start and now I’m consumed with wondering why it’s a secret. This is quite a sweet song though – sad and sensitive and restrained and actually quite affecting.

Piano. Untreated vocals. Rising, mawkish strings and rudimentary drums and something about family: we’re horribly deep into Heart FM territory here. It does tick all the boxes for a ballad though, and you can imagine this being a huge "lighters in the air" song live.

This one has an “Explicit” warning which makes me far more excited than it should, but I’m mystified as to why, unless it’s the references to “sex” and “fags” and we’re somehow back living under the Hays Code. It's another gentle, quirky little pop song - Allen has a great knack for those.

‘Everything To Feel Something’

Alright, this is better – beautiful cascading ivory and bracing lyrics and a genuine sense of drama: thank fuck, because this is the longest song on the album. I get lost in this one a bit and forget to type anything, but it’s good.

Oh, that’s that mood broken: whoever sequenced this is an arse. ‘Cheeky,’ reggaeish instrumentation and a return of the snarky Allen – it’s utterly jarring after the last song, especially when the guest vocals kick in.

Lily Allen has been to Paris, New York, Austin Texas, Vancouver, Sydney, Gothenburg and London, but didn’t have a very nice time.

Utterly zoned out on this one a little. It’s a jaunty enough little pop number, and quite cute – kinda harks back to the material on her debut album. Has an innocent feeling, which contrasts with the lyrical heaviness.

Invigorated with the promise of the final track, I dedicate all my listening energies to this one and…it’s fine – some nice bubbling bass stuff in the recesses and Allen’s voice dancing all over, but it doesn’t really do much, which kind of goes for the whole album really.

I get why it’s been nominated – the issues here are weighty, important ones that need a lot more airing in the public sphere (and much kudos to Allen herself for her guts and candour) - but judged just on music this is colossally, almost wilfully one-note, and it’s a pretty uninspired note at that, as if the production put in the bed and forgot the other layers. Sure, it’s right that Allen’s narratives should draw the focus, but maybe other mediums are better for that (she has a book out the same day as the Mercury Awards). An album really should, after all, be able to stand on more than just its lyric sheet and I don’t think that No Shame, a smattering of strong moments aside, does.