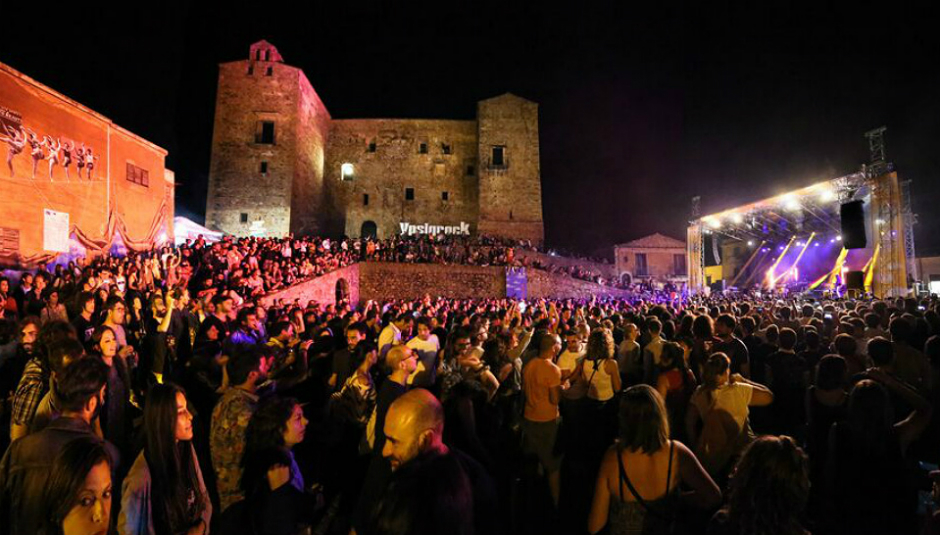 Small Is Beautiful: DiS Does Ypsigrock 2018

Small Is Beautiful: DiS Does Ypsigrock 2018

Tucked away in the foothills of the Madonie mountains, Castelbuono, a quaint, picturesque town where the old folk still dress up for church and everyone gathers around the town’s squares for the daily la passeggiata, seems an unlikely place to find one of Europe’s best music festivals. But this part of Sicily has been confounding expectations since Count Francesco I Ventimiglia built the Arab-Norman castle in 1317 to house one of the most influential family courts in Sicilian history.

Now in its 22nd year, Ypsigrock has become something of a mecca for Italian music lovers who come from far and wide to see the festival’s carefully curated blend of the quirky, the up-and-coming, and A-list stars. Bands too clamour for a spot on the lineup, seduced by the charm of gorging on some of the finest pasta, red wine, and gelato you’ll find anywhere while playing in the shadow of a 14th Century castle to a knowledgeable and respectful crowd. Indeed, the festival’s main ethos – that no band has ever been booked twice – makes it extra special for those who are honoured with an invitation to sample its delights.

Clashes are non-existent, courtesy of having just one main stage, sat in the shadow of that imposing castle, but the festival also makes judicious use of the town’s spectacular churches, halls, and courtyards for a number of early evening shows that are both intimate and mesmerizing. The Chiostro di San Francesco plays host to the dreamy, spectral post-punk of Belfast’s Girls Names, the sweet soul R&B of Ama Lou, and a typically bombastic set from Seun Kuti & Egypt 80 that’s a riot of colour and joy, while the cramped, sweaty confines of the Ex Chiesa del Crocifisso falls foul of the heatwave, forcing Blue Hawaii and Niklas Paschburg to seek out cooler climes.

Ypsigrock prides itself on retaining its local roots – the organizers go out of their way to make sure the event benefits residents as much as out-of-towners – and giving some of Italy’s most revered artists a platform to reach an international audience. This year’s highlight is Alfio Antonico, a folk legend from the 1970s and master of both the tammorra and the Sicilian frame drum. Starting slowly, he works up hypnotic rhythms as his fingers dance across the skin and tap out beats, guttural cries and sweet vocal melodies adding to the primal quality of the tradition that’s been called “an ecstasy – a time out of time.” The audience sit with a wide-eyed reverence, barely moving and bewitched by something that’s part song, part dance, and part prayer.

Sitting at the very opposite end of the musical spectrum are Confidence Man, the Aussie duo that have torn up just about every festival going this summer with their high N-R-G, camp pop stompers. Here is no exception; their Thursday night set is a wild ride of costume changes and the sort of bonkers brilliance that demands manic dancing and hand-in-the-air sing-alongs. There’s something joyously unashamed about their lunacy, and while it might be hard for them to sustain such an act for another record and beyond, for the moment there’s no better feel-good party band on the planet.

Pity AURORA then, who follows them on stage and seems positively anaemic by comparison. Her slick, bombastic pop doesn’t fare well this late at night, and you can feel the energy drain away from the crowd. It’s all very polished and precise, and there’s no doubting her immaculate voice, but the set lacks any kind of spark. The Horrors, drawing from their extensive back catalogue, have no such problems. Playing amid swirls of blinding light and smoke, at times it’s hard to even make them out on stage, singer Faris Badwan a ghostly shadow behind his mic stand. Their newer, riff-heavy arena material sounds fantastic – more euphoric than their garage rock roots, and imbued with a dark brooding grandeur.

Saturday brings more heavy noise in the shape of Algiers, a criminally underrated experimental group whose aggressive fusion of punk and gospel is on way too early in the evening. They perform with raw power and fury, indignation dripping from their instruments, but it doesn’t connect as well as it might with a looser, late-night crowd. The Radio Dept. suffer the same fate as AURORA; their lo-fi dream pop drifts off into the night, unmoored and flat. The sparkle of their best material fails to shine through, but the fault lies with what they’re up against as opposed to any personal failings – they’re simply on at the wrong time.

Youngr’s dark euphoria though is perfectly pitched, an uplifting, fun 40 minutes of catchy pop bangers and bouncy dance music that has the kids down the front throwing wild shapes and the oldies at the back nodding along appreciatively. A euphoria of an entirely different kind is provided by Saturday’s closer Vessels, the Leeds quintet who have morphed post-rock and electronics into hazy, otherworldly four-to-the-floor wonders.

Their songs ebb and flow, growing to widescreen crescendos before slinking back into dark grooves, all aided by a mesmerizing light show. But you could equally enjoy this with your eyes closed, lost in your own brain as the music swirls around you. The last six minutes of ‘Elliptic’ in particular are a pure adrenaline rush, as the motorik beat is slowly submerged beneath swelling synths; it’s the type of song that could lift you all the way to the stars.

Shame, Sunday’s opener, deal in the gritty and down-to-earth, but are no less impressive for it. Their post-punk hymns and don’t-give-a-fuck sneer have won them buckets of acclaim, but it’s live where their anger burns brightest; taut, bruising, and utterly compelling. It’s not long before frontman Charlie Steen is sweaty and shirtless; a few songs later and he’s in the crowd, walking over hands and damn near strangling himself with his mic cord. Songs like ‘The Lick’ and ‘Gold Hole’ convey the sense of exasperation many feel at the world, and three years of hard touring have honed Shame’s unholy racket to a razor sharp edge.

On reputation alone, The Jesus and Mary Chain leap out as the biggest name at this year’s event. But bringing the festival to a close on Sunday night, they also play as if affronted by the suggestion they’re no longer relevant in a world in thrall to angry young punks and pop maestros. They follow The Horrors in playing behind a curtain of blinding white light and dry ice; guitarist William Reid never strays from his position just in front of his Marshall stacks, playing half the show actually facing the amps, while brother and singer Jim steers clear of the front of the stage. The aim is clearly to put the music front and centre, and when one of the more ordinary moments is a still impressive rendition of classic ‘Just Like Honey’, you know just how good a show you’ve witnessed.

Wander the narrow cobbled streets and alleyways after the shows have finished and you’ll find bars and restaurants still open, music playing, grandparents sipping Aperol Spritz next to skinny-jeaned hipsters. It’s an event that the whole town welcomes with open arms, throwing open its doors to an (increasingly) international audience that appreciates the homely charm and delights in the joys of rural Sicily. There aren’t many festivals like this precisely because there aren’t many places like this. Carving out a niche in the modern festival landscape is a hard thing to do, but Ypsigrock stands virtually on its own, a boutique event with an impeccable ethos. There’s much to love about it all, and much other events could learn.

Ypsigrock takes place in Castelbuono, Sicily, every August. For more information about the festival, including details of the 2019 edition, please visit their official website.