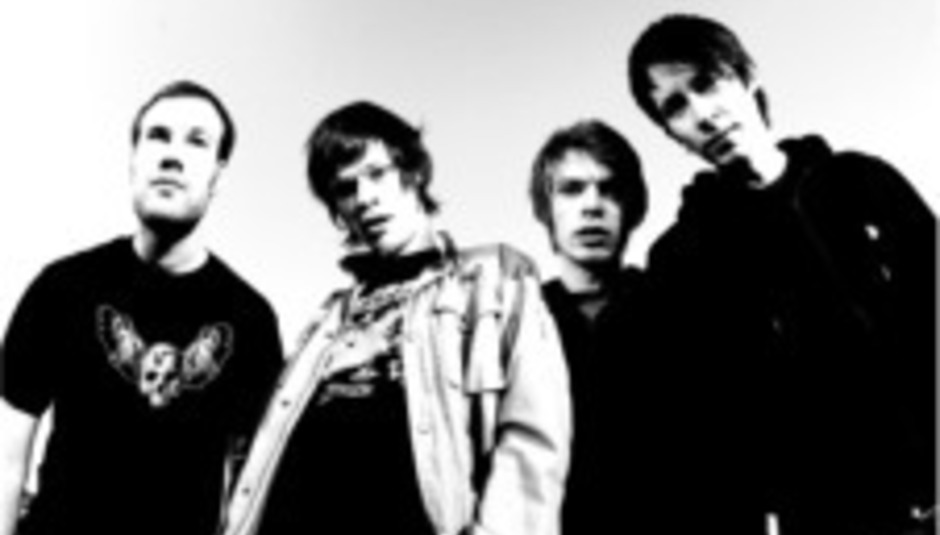 As per the warning found here, Raz has finally brought you an interview with the cream of the current European crop. This is Disco Ensemble. Hailing from Helsinki, Finland at a combined weight of four young men, this band is scheduled for success. Oh yes. Having caught up with the rocking Finns in Holland last month and failed to get even close to doing an interview, emails were duly sent and lively frontman Miikka Koivisto answered some quite ridiculous questions as appropriately as he could.

How do you cope with the long bleak winters in Finland? After six months straight of nothing but nighttime, surely you just go stir crazy?

"Well it's a matter of adjustment. The suicide rates are huge in Finland in the wintertime and it cannot be a coincidence I guess. A lot of people get depressed as well. I think you need to have a certain attitude towards it, like, 'This is shit, but I will survive'. It's kind of romantic as well, you know, just battling through the dark days every year and in the end the spring eventually comes, though it doesn't always necessarily feel that way."

On the seasonal flipside, the six straight months of sunshine you get in the summer must also make you go crazy, albeit in a different way. Do you appreciate that weather more after the winter?

"I guess so. In June the sun barely sets and people do go a bit mad. It's just drunken people lying everywhere, haha. When it's only ten degrees outside, people stroll around with just shorts on, everyone still pale as fuck. I guess you have to make the best out of it. Last summer was great because we had a lot of festivals so we didn't have to work or study at all and you could just be fucked up and go swimming and enjoy the summer, which is quite rare."

Your main national representatives in the UK's mainstream music stream are HIM and The Rasmus who rack up smash hits and sellout tours by the grimy bucketload. How cool is that?

"It's too cool, baby! Have you noticed how similar they look, with the goth-image and beanies and tattoos and stuff? We've been thinking about dressing up as colourfully as possible, make songs about how amazingly beautiful it is to be alive and just bicycling around with daffodils tied to our hair."

Other than those bland world-beaters, how do you find the music scene around Finland? I know there's a lot of Heavy Metal and a lot of really cheesy pop and your hard rocking attitude falls into neither category, so do you see yourselves as outsiders or part of the mainstream?

"We've been the outsiders, I guess. The metallers and the hardcore punks probably think we're too gay and the mainstream is kind of trying to understand because they don't have a choice. There's not much stuff like us in Finland, for sure. People have thought of us as a bunch of weirdos, but now since First Aid Kit came out and we've done so much touring we've grown to be much bigger in Finland than we could have ever thought. There's some other great alternative stuff that's quite big in Finland at the moment as well, so it's getting better all the time. Check out bands like Lapko and Rubik, they're ace."

I will do. What is First Aid Kit about?

"It's about survival, I guess. Just about getting through the day, you know. Inspiration is easy to draw from the occasional realisations of how hilariously fucked up things are and how nice it is to dwell in that feeling of hopelessness. Music-wise, it's just about good riffs and tunes and playing as loud as possible and having people's fists raised during the chorus."

You've gained your success so far while being signed to an indie label. Is the hard work and DIY ethic the same as it is in the rest of the world? Because obviously the indie philosophy and the associated middle finger to The Man is quite cool, no?

"It's too cool, baby! (Sorry). The majors in Finland are pretty much useless since it's a small country and the scene is fairly easy to promote if you know the ropes. Fullsteam Records was an obvious choice for us since we knew the guys so well and they have a great attitude towards music. And yeah it gives us bundles of street cred, of course. It's, like, pouring out of my pockets right now."

I can smell it. Being on an indie label is all well and good in your motherland but, now that you have a view to conquer the world with your fine music, do you want to sign to a major? Would it help you?

"We'd like to sign to a company who understands us and gives us the best tools to make brilliant new music and put it out in the right way. And of course it's a dream to have this band pay the rent and to see the world. I donï¿½t know if that has anything to do with the label being a major or not. I guess there are advantages and disadvantages in both. Is that diplomatic enough?"

Quite. You just toured with Hell is for Heroes late in 2005 and here are some really crap questions. What is your ultimate hell? Who are your heroes? I'm not going to ask you what sound you'd like to drown in, because you'd say something rude.

"My ultimate hell is trying on a suit in a sweaty booth at the H&M of the biggest shopping centre in Scandinavia, Itakeskus. And there would be people looking into the booth and asking repeatedly: 'Does it fit? Does it fit? Miikka, does it fit?' But Disco Ensemble's hell would be playing with Crazy Town at the NRJ Awards [I think that's the Finnish equivalent of the Smash Hits Pollwinners' Party which, of course, won't ever happen again - Raz]. Our heroes are James Hetfield, Mikko's father, Prince, Freddie Mercury, Iggy Pop and He-Man."

"We go to discos together on the ferry trips from Helsinki to Stockholm every time we're on our way to mainland Europe. They are absolutely hideous places filled with hideous people. Maybe that's where my hell is actually... But anyway this one time we had a blast collecting all the leftover drinks from the disco's tables and pouring them into a huge pint and making our bass player drink it. He threw up so much."

Lovely. In the UK we have these great crisps called Discos. Have you ever eaten them?

What are your favourite crisps?

I wish I could pronounce that because it just galvanises the claim that Finnish food is crap. It was said that it's the only national cuisine that's worse that British food. What is your favourite food? Today, I had a brie, apple and grape sandwich.

"We get a lot of pizza and pasta on tour, but a few days ago we had a long drive from Berlin to Chiasso and we hadn't eaten in like 28 hours and they had simple home made tomato pasta at the venue and it was the best meal ever. Anything with spinach is also highly respected."

Bah. Vegetables. When I went to Finland last year for Ilossarirock, some notable men in the world of heavy metal were encouraged to drink the tasty Finnish gin and grapefruit concoction called 'lonkero' and they enjoyed it thoroughly. The other week a Finnish lady said only women drink that. What do you reckon? Metallers or Finnish women? Who's right?

"Oh man, lonkero is so girly. It's good though if you've had just beer for the whole night and you need to have a refreshment. I thought the metalheads drink only vodka straight up. Or at least that's what they want us to think..."

I prefer whiskey but Jagermeister's a great way of getting really fucked up isn't it?

"I agree. Especially with Red Bull or orange juice, right?"

Right. I have also found that downing a straight shot out of a plastic test tube has similarly disastrous consequences.

Disco Ensemble are going to be playing the South By Southwest festival next month so if you're going to that, it would be folly to miss them. They'll more than likely be playing a Finnish showcase somewhere or other. More interestingly, the Finns are going to be playing the The Great Escape festival with some other folk at the Brighton Barfly in May. They may also be touring other places in the UK around the same time but, fear not, DiS will make sure you receive all pertinent information via the medium of Interweb. You really should not miss this band.