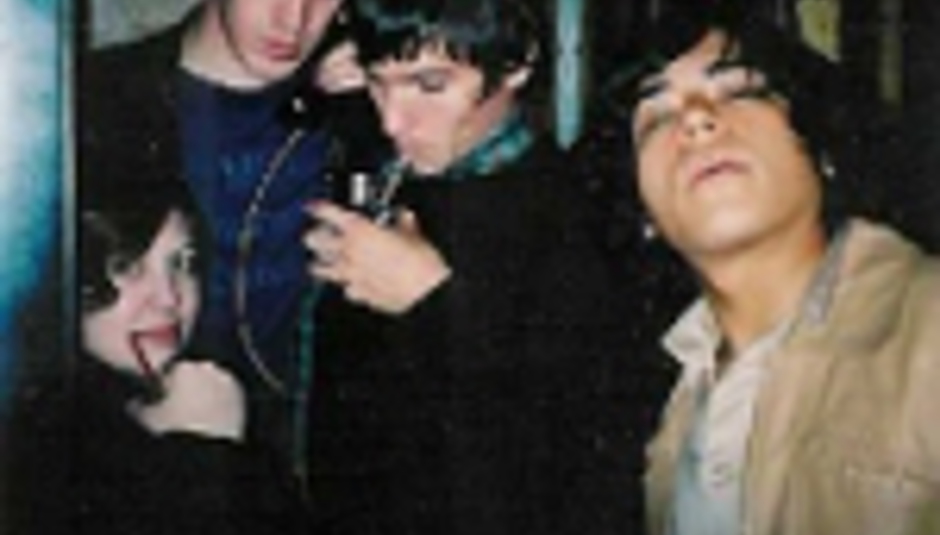 The Definitive Sound Of L.A.

The Definitive Sound Of L.A.

by [redacted] March 22nd, 2004
It’s Friday, 19th March 2004. Franz Ferdinand have just played to a sold-out-month-in-advance gig at the 500-capacity Troubadour in Los Angeles. The band pop downtown to their aftershow party at The Plastic Factory, where they will do a bit of DJ’ing. Three bands will play to a sweaty crowd. One of those bands is The Blood Arm. Co-promoter, Hi-Fi (we suspect, not his real name), told DiS: “I walked in with Alex and Nick from Franz and they immediately said 'who is this?', one song later they said 'this band are brilliant' after the next song they said 'we want to have The Blood Arm support us when we return to LA in June'”. Weirdly enough, the band had already bought tickets for the Franz show, and didn’t realise at the time they’d end up playing the aftershow party. Bless.

So, apart from being big fans of The Fall (that’s what they tell us, and it shows a little in their music), who the hell are The Blood Arm? DiS asked vocalist Nathaniel Fregoso to explain. Talking about the aftershow party, he says: “There were a few hundred people and everyone was energized by the Franz Ferdinand set. We started at 1am and played just over half an hour. People looked very excited and were dancing until 6am.”

A bit of The Blood Arm’s history, then. “The band, as it stands now,” he begins, “started when our drummer Zach joined in November of 2002. Before that Zebastian, Dyan, and myself played as a three piece for about six months. Since then we've been refining our sound, writing songs and playing shows non-stop. Zebastian, our guitarist, was in a band called Farmers Of The Underworld that gained some notoriety in the suburbs of LA. The rest us have never been in any other bands.”

As well as being in the band, they’re engaged in other projects. “I'm currently working on some instructional videos. Zach goes to UCLA and is majoring in Microbiology, Immunology, and Molecular Genetics. Occasionally he does some modelling and acting to pay the bills. He has a small role in an upcoming episode of FOX's ‘The OC.’”

The Blood Arm recorded a four-song demo over one weekend, with the sole intention of using it to book gigs. What they didn’t expect was the airplay it received on radio stations KXLU and KROQ. But they’ve found it hard making a name for themselves in LA and to create “a definitive sound”. “We're only as good as our last show, so for us every gig is notable.”

An article in a magazine called Fugue noted, along with them having a hint of The Doors to their sound and attitude, that they “actually look like they’re from LA, not Boston.” Nathanial explains: “The article is stating that we are unabashedly part of Los Angeles. Our music is the definitive sound of the city and not a copy of New York, Boston, or Detroit rock. In short, great music is being made in Los Angeles and we want the world to know it.”

Their next step was to record their album. They had an album’s worth of material six months ago, which they simply “threw away”. After heavily scrutinizing and cultivating their sound, they got something more cohesive together, which was finished a couple of weeks before we got in touch. “I'm incredibly excited about the new album. The demo helped establish our name, but the album is a document of what we're doing right now. We recorded it at The Ship in Eagle Rock in about four days. At 12 songs and just under 40 minutes, the sounds and the songwriting of the album have improved significantly from our demo. Forged by months of live performances, the body of work sets itself apart from anything we've ever done. We plan to make an initial run of 1,000 CDs and vinyl to sell on our website and at shows, then see what happens from there. There are many more albums to come and I think this one is a strong foundation.”

You might not be able to get your hands on the LP just yet, but if you pop on over to www.thebloodarm.com, you can download a couple of their demo tracks and find out a little more about the band. Tell them DiS sent you.

They hope to tour the UK this summer and “put Los Angeles back on the map!”. See you down the front.