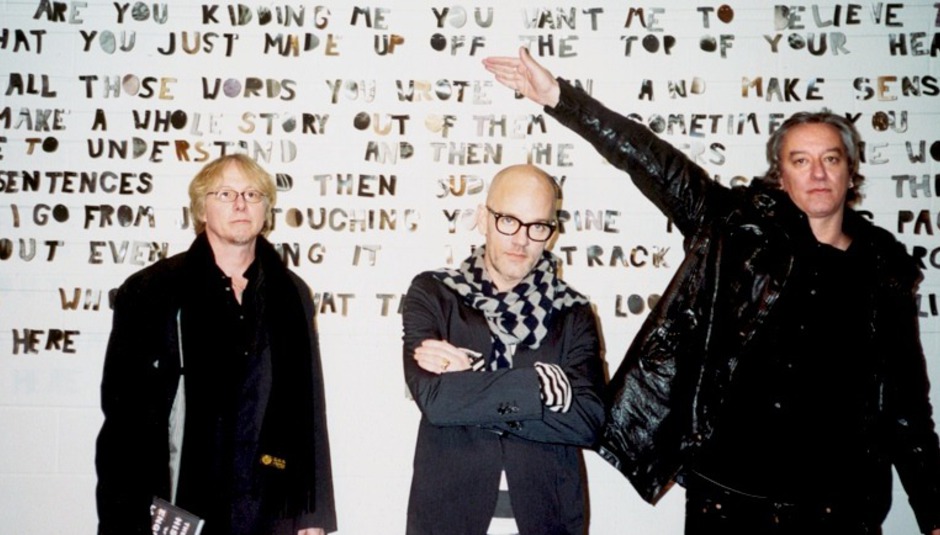 In the wake of the news that REM have called it quits, DiS reviews editor Andrzej Lukowski shares his thoughts on the band he fell in love with at the age of 15 and charts their glorious decline...

When DiS' editor asked me to write a ‘tribute’ to REM, I felt a touch daft: as I write this there are two tribute threads to the band pootling away, and I’m acutely aware that some of our older readers have been into the band considerably longer than I have.

In fact, from a certain point of view, I probably hopped on board the REM wagon just as they started their ‘decline’: after years of meteoric, effortless rise, the band’s sales started to slip with 1996’s New Adventures in Hi-fi. Aged 15, this was the first record of theirs I bought, slowly lured in by the sheer strangeness of the single ‘E-bow the Letter’. It’s a song that would surely never have received a peep of airplay were it not for REM’s then massiveness, and it sounded like nothing else on the radio; I spent weeks sizing it up and listening in bafflement whenever it came on, before coming to the conclusion that yeah, it was pretty rad. Around its release, REM had signed some sort of stupidly large contract with Warner Bros for five more albums; I didn’t see it, but I heard there was some episode of The Culture Show where a bunch of douchebag cultural critics sputtered apoplectically over whether NAIHF was ‘worth’ $80m. This seems like an even more abstract discussion now than it was then, but the fact is that NAIHF and 1998 successor Up were exemplary examples of how to be signed to a major label for megabucks and not be a dick about it: the former was a set of wired, ravaged , genre-spanning art rock, largely recorded on the road; the latter was a sprawlingly beautiful, emotionally frail character studies wrought on antique synths and drum machines after drummer Bill Berry went off to become a farmer. They were both born out of a certain necessity, but there wasn’t a jot of compromise in either record.

The next decade is the one where I guess the ‘rot’ began to set in; I have written tediously and frequently on these boards about my theory that this had little to do with Berry’s leaving, more to do with the band becoming a self-conscious, part time affair, overly concerned about their diminishing fanbase and what type of record might bring them all back. But this certainly didn’t mean they ever attempted an Automatic for the People 2, and for all their faults, there is plenty of superb music on their final four albums (even Around the Sun, a poorly-produced record with some decent songs, which the band later rounded upon with a vehemence that always struck me as being mostly to do with its disastrous US sales). And their live shows of the Noughties, of which there were a lot – a short Reveal promotional tour, a world tour apiece for In Time and Accelerate and two for Around the Sun - were sublime. I wish I’d known it was the last time I’d ever see them, but I am super glad that I sacked off the Sunday of Leeds 2008 in order to see REM in Manchester.

The raw power, energy, emotion and humour of those live shows was astonishing and one did wonder how long Stipe, in particular, could possibly keep it up for… that question seems to have been answered. Fuck knows why they really called it a day now; there are a lot of strange things about the way final album Collapse Into Now was promoted (or wasn’t, as the case may be). Certainly it’d seem a bit awry if this really was the end and there wasn’t at least a symbolic farewell. But these things happen. REM haven’t been my favourite current band for the best part of a decade; the fact they remain my favourite band of all time is largely to do with the immaculate body of pre-NAIHF work that I’ve not discussed. I am definitely not the best person to write this tribute. I only got into REM after the glory years. There are probably other people more upset that this is the first days of their lives without REM. I was only there for the decline – and how glorious it was.

Pay tribute to REM below by posting your favourite songs, playlists and memories... and what was your gateway REM song/album?

Guided By Voices to release new record in 2012

DiS Tip: Hey Sholay are coming your way (if you live in the UK)