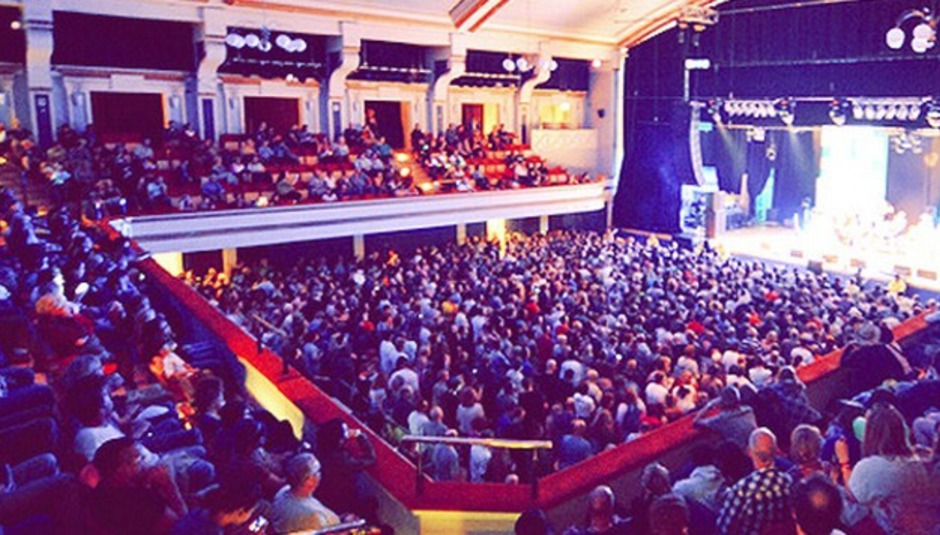 For several years now, Drowned in Sound has 'curated' (for want of a better word) a bill at Summer Sundae festival in Leicester. We've had everyone from The Antlers, Frightened Rabbit, Futureheads, Blood Red Shoes and Noah & the Whale (the week they first hit the top ten, no less) to Wild Beasts and Warpaint.

We've been asked to do it again this year, and have even managed to extend the hours of the event to put on a little festival closing party. As per the past few years, DiS will host the Indoor Arena (also known as De Montfort Hall) on the Sunday evening of the weekender. The sound system in there is always pretty spectacular (I think I can still feel Factory Floor vibrating through my legs from last year). It seems this weekend you might be sheltering indoors from the sweltering heat, instead of the traditional liquid sunshine...

This is who we have booked and when they're on and a playlist and stuff...

These post-rockin' locals have been a name mentioned on the DiS boards for several years now. They have released two albums and a heap of EPs and played shows with a lot of our favourite bands, and we're very pleased to have their strings and things push the days proceedings ajar and caress you from hungover slumber into the day ahead.

Summer Sundae are always keen for us to feature some local acts, and it's always amazing realising quite how many great young bands there are lurking in Leicester. Her Name Is Calla and Maybeshewill released a split single together notsolongago and they deal in a similarly glorious gentle-but-occasionally-LOUD Mogwai-snogging, Explosions in the Sky-gazing post-rock. Fans of 65DaysofStatic, you better not still be in your tent when they take the stage.

By now, you've probably had a pie, and maybe a pint or two (the ale tent is worth a trip, if that's your thing), so hopefully you will very much be ready for these soulful scruffians from Sheffield. They have one of the most compelling frontmen in the UK, and manage to turn what at first sounds like jingle-jangle indie-pop into these delightfully psychedelic cauldrons of glee.

Turning the dial up to eleventy is the only act we've imported from overseas (how many festival bills have you seen lately that are made up almost entirely of British acts? We clearly got that TeamGB memo and took it to heart...). Touring what looks likely to be one of DiS' albums of the year, these dudes from Vancouver are everything rock 'n' roll should be: brash, discordant and life-affirming. This will be a set filled with moments to sling your arms aloft and scream along (it doesn't matter if you don't know the words).

I had to triple check that we hadn't had Twilight Sad play for DiS at Summer Sundae before. Must have been some sort of oversight, but we're making up for it this year by inviting the chaps down from Scotland to scorch our hearts, and sizzle our ears with those guitars of theirs.

"You're a cog in the machine, it's like a default!"

Easily one of the all-time great British songwriters. He's won plenty of awards, but more importantly he's won the place in the hearts and minds of music lovers. We're exceedingly pleased that Ed has agreed to play his songs that are laced with such grace and sadness for us, and if you see any of the DiS staff looking like they're sobbing, that's because they are.

Following a short break to proceedings for someone to sweep up the cups while you eat another pie and perhaps watch PiL (don't worry sun-fearers, it'll be dark by then), comes the 'chill-rave' of this Mancunian. We don't think he'll be joined by 10 singers and dancers like he was when he played under the Christian Aids guise for DiS at Great Escape last year, but we're pretty sure his snarky graphics will be in full effect whilst his sigh-fi will have them arms of yours swaying.

Before he got blog-famous, Derwin played his first ever festival slot for DiS at Summer Sundae. In blog years, it was forever ago, but in reality he's only had one album (and a trillion remixes) out since and remains one of the most exciting new artists in British music, as he consistently manages to fling such humanity into dizzying digital dancescapes.