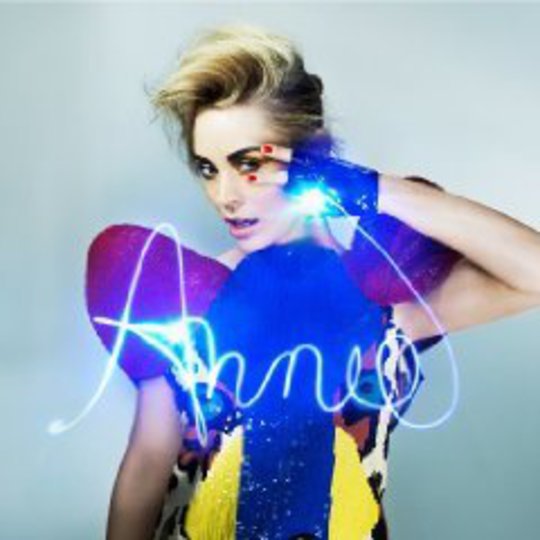 The line between the underground and the mainstream is at times so paper thin that you can live in one whilst being clearly designed and ready for the other. Annie is one of underground music’s refugees, in that she has always seemed to belong with the glamorous elite. She is independent enough that nothing comes across as being over-styled, contrived or dictated, but at the same time she seems like a purist, thus avoiding being part of any horrible irony-heavy hipster appropriation of pop (beloved as she may be by irony-heavy hipsters). With songs like ‘Chewing Gum’ and ‘I Know UR Girlfriend Hates Me’ the Norwegian native sits on two of the decades greatest pop moments that rank alongside anything by Minogue, Spears and GaGa.

Why Annie is not bigger is a lengthy discussion for another day, but what irks the most about her failure to launch is that it feels like such an injustice. It’s frustrating that people don’t adore bands like say, Field Music or Metric, but in but in a world of logic and reasonable thought it ultimately makes sense. Quite why Annie remains on the starting grid watching her contemporaries roar ahead is a question that remains as unanswered as it puzzling. Label politics is at the root of it (Island failed to support her properly then dropped her) hence the 15-month wait for this record. That long protracted delay and Annie’s current lack of major label muscle is why approaching Don’t Stop is at times a sad affair. It’s brilliant - packed full of the sort of songs that would get X Factor judges saying things like “Smashed it” and contains enough moments to inspire a whole second generation of wannabes like Little Boots. Ultimately, though, it feels hollow - great pop music lives and breathes off success, the roar of the crowd and the high street Zeitgeist.

From the opening chant of ‘Hey Annie’ this album twists and turns, dropping melodies and innovative moments like they’re hot. The beats chug and the bells chime whilst Annie cuts through the malaise with a crystal clear vocal that is as restrained as it is powerful. The production throughout ‘Don’t Stop’ is noticeably strong. The sound is taught and modern but avoids the current pitfalls of sounding like a prime cut of Stock, Aitken and Waterman Eighties chart fodder or a Timbaland reject circa the year 2001 - hats off to one time Sugababes collaborator Richard X. Annie, though, is the key component here. She is unafraid of her emotions and soundtracks the duality of confidence and insecurity with an effortless charm. Perhaps it’s the idea of a Scandinavian music family placing Karin Dreijer Anderson as big sister to Annie’s younger, but 'Take You Home' is almost Knife-esque, with deep electronics and the swirling sound of the abyss. “Looking for trouble that’s what I am, playing a game we both understand” she sings seductively leaving nobody confused as to her intentions. The soft rock ballad ‘When The Night’ flirts with Eighties Prince and the gushing sentiment might be sickly in some hands but Annie melts effortlessly into the starry backing as she coos in a broken state “I can’t believe I wanted this phenomenon.” Despite using imagery involving animals and lightning, the song feels like it was designed for a video treatment involving rain on the window, piles of tissue, big blankets and long glances at framed pictures of the heartbreaker.

The skill of being human is one much underrated and under appreciated in the modern pop market. Where many settle for baseless empowerment, like Pussycat Dolls ‘When I Grow Up’, or bizarre self-suppression such as Beyonce’s ‘If I Were A Boy’, Annie is unafraid to enter the ring saying real things with a modern wit (‘I Don’t Like Your Band’) and an open soul. ‘Bad Times’ is a pulsating and direct hit with great use of both synthesisers and falsetto vocals whilst ‘My Love Is Better’ is positively Shampoo-esque in its defiant flirtiness and colourful rebellion. The retro ghost of female Britpop rears it’s head a few times actually, most noticeable on ‘Heaven and Hell’ and the positively Nina Persson/ Cardigans-esque ‘Loco’. The sound of Annie having fun in her writing and recording is infectious and most evident on the frankly bonkers ‘The Breakfast Song’, which is destined to be a great lost kids TV theme tune and a song that the bosses at Kellogs should be listening to as soon as possible.

Explaining how great Annie’s music though is merely half the battle. She has a great album, so what? If Annie is to rank alongside the names we all know, the shopping centre soundtrack, magazine fodder then there needs to be a network and financial backing surrounding her that is not currently in place. It might be indie sacrilege to suggest this, but Don’t Stop needs looking after by a massive label with all the support in place. Given half the push someone like Mr Hudson or Noisettes have had this year, Annie would deservedly be blaring out of mobile phones, digital radios and chart run downs. Her face belongs on billboards, her name up in light, and damn Island for letting such an obviously brilliant writer and performer fall by the wayside. Perhaps it’s wrong to think all pop music needs to be popular, but to these ears glorious melodies and music longing for bedroom crafted dance routines like Annie’s not only deserve but require mass acceptance and acknowledgement. The inescapable feeling that ‘Don’t Stop’ probably won’t sell all that many copies makes the songs sound like electric guitars without amplifiers. There are only so many things a musician can provide and sadly Annie has it all but that key component.