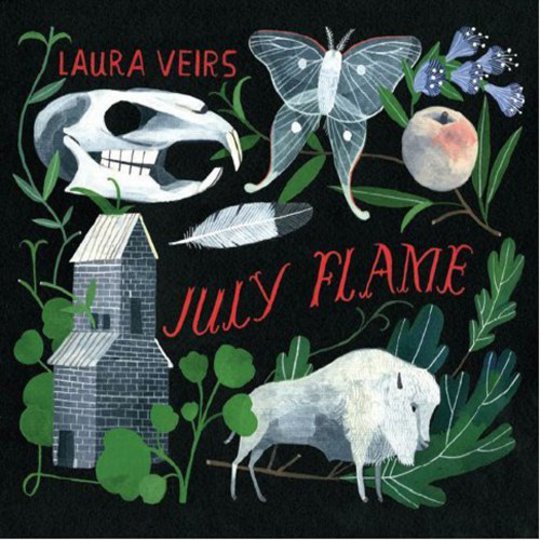 Stuck in the midst of winter, it's sometimes hard for us to see as far as its end. It must feel like a trudging schlep for record label bosses, too. December and January are famously quiet months for major music releases, but practically every year there's a winter album that sticks in the memory as much as the wince-inducing torment of waking up on icy mornings for months on end and essentially wanting to die, or at least move. Bella Union had a fair amount of success with Andrew Bird's Noble Beast this time last year. For 2010, Laura Veirs' seventh album, July Flame, seems to have been strategically released to warm the cockles of our collectively frozen heart.

It's fitting that the album should be inspired by something as eccentric as a variety of peach. Apparently the Colorado-born and Portland-based Veirs devoured July Flame peaches on particularly hot summer days during 2008, a habit that helped to kick start her songwriting after a creative slump. It's an eccentricity that serves to symbolise an album, which, thankfully, doesn't concentrate too much on soft fruit and sticks to more dependable subject matters: desire (both the carnal and innocent sort) and loneliness are the main lyrical pivots.

Admittedly, Veirs' take on folk isn't exactly a new one, but by uprooting well-trodden methodologies and germinating largely acoustic songs with flourishes of well-tempered sonic adventurism and mood setting, she's breathed life into what could have been a monotonal record. Added to this is her equally youthful and ageless poetry, which offers clues for inquisitive listeners wanting to decode the album's labyrinthine lyrical mappings. It's a technique that has served other singer-songwriters well: Rufus Wainwright, Feist and Regina Spektor come immediately to mind. All their music is, to all intents and purposes, folk, but with a pop pulse; a sound that doesn't just tip-toe around the heart, but injects it with a warming, vivifying intoxicant.

With a slight twist of irony perhaps, July Flame opens with the kind of blissful folk-pop that would elicit universal, ear-to-ear grin happiness around Bella Union HQ. Is it a bird? Is it a plane? Is it Robin Pecknold? Well no, it's actually the falsetto of one Jim James, who carries out typically reverb-strewn vocal duties on a number of tracks. It's a beautiful opener, and though the album has a faintly summery hue, 'I Can See Your Tracks' comforts like the proverbial log fire on an all-too-real winter's night. There's intimacy and warmth at the heart of its chill, as James and Veirs' combined harmonies descend from snowy mountains into the valleys below.

The transition to the title track is an unexpected one. Veirs swaps her Fleet Foxette role for something more in common with the passive sex-aggression of Karen O. It's a jolting costume change. A few minutes ago Veirs was offering you some more layers against the chill, now she's almost pulling your clothes off. 'July Flame' is something of a deviation from the rest of the album, but certainly not an unwelcome one. It's certainly more likeable than some of the album's other, more expansive forays such as 'Silo Song' and 'Summer Is The Champion', which probably could have been cut to make things a little leaner.

Slight discrepancies aside, July Flame triumphs when the music is stripped and Veirs' reflective folk-pop and country-folk songwriting comes to the fore. As it transpires, July Flame is a treasure trove for the wistful daydreamer. It's clear that Veirs, as a songwriter, playfully exists in the parallel world that lies between rational everyday thought and the whim of dreams and furtive desires. Her tales can be childlike and profuse with teenage romanticism 'Sun Is King', racked with jealousy and suspicion 'Where Are You Driving?' or more like fantastical bedtime stories 'Sleeper In The Valley'. The delicate 'When You Give Your Heart' is so beautifully evocative, it's easy to find yourself imagining the actual songwriting behind the song: Veirs' butterflying summer daydreams, flashes of colour that appear and disappear from view; trapped images becoming scratched out bits of ink on scraps of paper.

It almost goes without saying that July Flame is a profoundly feminine record. Like her soothing soprano, Veirs' quest for love bears both strength and vulnerability and exposes her gut-led determination and ultimately, a lovelorn weariness, as expressed in the mist-laden, White Chalk-influenced 'Little Deschutes'. Towards the end of the album, Veirs also spares time for one of her own heroines, Carol Kaye. “Not a household name but she's been in you head all day / It would be so cool to be like Carol Kaye,” sings Veirs. She may have a few more sessions to go to match Kaye's prolific achievements, but once it's lodged in the mind, July Flame's sweet vibrations are pretty damn hard to shift.