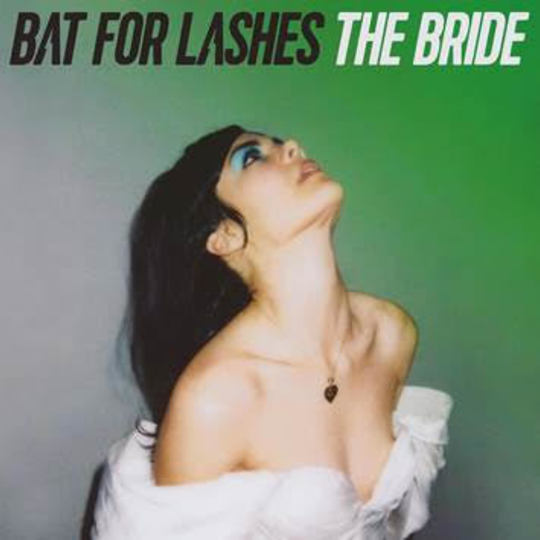 ‘A dark meditation on love, loss, grief, and celebration,’ the press release calls Bat for Lashes' latest, and that’s great - what we really need right now is more fucking misery. But then Natasha Khan has always excelled in conjuring other realms, from shadowed glens to snowy Downs and two suns burning over strangers in strange lands: maybe alter egos and epic journeys are precisely the solution.

And hey, The Bride is quite the journey, from the title character's widowing at the wedding alter to the honeymoon car speeding down the highway, "yellow lines like veins" and "white veil thrashing in the wind", the passenger seat’s red leather "cold as a March rain" as Chapter One - that’s right, there’s an actual written story that goes with this - puts it. There’s "pretty girls" with teary eyes, statues that peer on pityingly and ghosts that hover as green lights, car crashes and spectrophilia and emotive third-act redemption - the whole project’s pretty much a York Notes of gothic noir plot devices, replete with love letters and newspaper clippings and ‘air fresheners from The Bride’s car’ for those poring through the special edition.

And yet for all this effort the album itself is at times curiously empty, both overblown and underwhelming, with loads of smoke but not much atmosphere. Taking its cue from The Haunted Man the arrangements are generally stripped-back and sparing, the focus thrown onto Khan’s (still incredible) voice rather than on the kinetic, driving rhythms that characterise her earlier work - certainly there’s no ‘Daniel’ here, no ‘Glass’ or ‘Trophy’ or climactic, epic ‘Two Planets’, all pagan drums and sweat-soaked ritual. For that you’d have to look to last year’s Sexwitch EP with its wild, untrammeled id and heady lust: by contrast The Bride seems pretty chaste.

Well, almost - there is one song where the protagonist fucks the ghost of her dead fiancee - but for an album with such narrative scope this ‘classic road trip through the heart’ rarely leaves the sonic A-roads. Opener ‘I Do’ sets the tone and indeed the scene, low-key and pretty but with a forebode of menace as the Bride anticipates her groom: ‘All of the sorrow will drop away’, Khan sings, and it’s sweet but inessential, a prologue soon forgotten. ‘Joe’s Dream’ is much stronger, thunder rolling behind moody chords and spectral wailing, dark but danceable in the best Bat for Lashes tradition, whilst ‘Sunday Love’ is pleasingly frantic, a fever of beats and bass and stabbing synths. Elsewhere ‘Honeymooning Alone’ shivers with dusty guitar and Portishead rhythms, whilst closing bonus track ‘Clouds’ is wonderfully haunting, building from its sinister guitar chime to a dramatic, cathartic fade.

They’re the highpoints - and to be fair they are pretty high. But they’re offset by a ream of songs - ‘Never Forgive The Angels’, ‘Land’s End’, ‘If I Knew’ - that don’t really do a whole lot, passing by in a wash of minimal instrumentation and fey lyricism that’s neither fragile enough to be truly affecting nor gripping enough to justify the runtime. Worst is ‘Widow’s Peak’, a mid-album descent into spoken-word that still, 23 plays later, has me laughing actually out loud at its sheer staggering pretension, its crystal skull cod-mysticism and overblown, sixth-form drama student delivery, but mostly - mostly - at its rhyming couplets.

"Don’t wake me up too soon/there’s a halo on the moon". "You hunger, I’ll thirst/pink stars do burst". "You’re my blood, you’re my wine/you’re my mountain to climb/say you’re mine, you’re mine, you’re mine" And, later, at the album’s peak moment, its stirring emotional crescendo in ‘I Will Love Again: "I will turn it back around/I’ll be homeward bound", repeated over and over until The Gruffalo starts to seem like high art, like fucking Chaucer in comparison.

Sure, loads of great albums have shocking lyrics, but they’re especially noticeable here - pretty much lit up in burning neon - on songs that place them centre-forward with everything else turned down. And yeah, it might all be being presented in character - a useful conceit as no real person could get away with singing this stuff - but that doesn’t really excuse it, doesn’t make it any less disappointing when the string arrangements are cut into so jarringly with lines that provoke a physical wince.

But hey, it’s still better being in Khan’s world than ours right now, speeding away from the tears and the tragedy in an old car towards the sea. Maybe shocking rhymes are what we need right now - a salve against the awful realities outside our headphones, the racists on our streets and the morons jostling to marshall them. It’s a shame though that fourth time around it’s not quite such a compelling place to be, and not strong enough to keep the real world out.