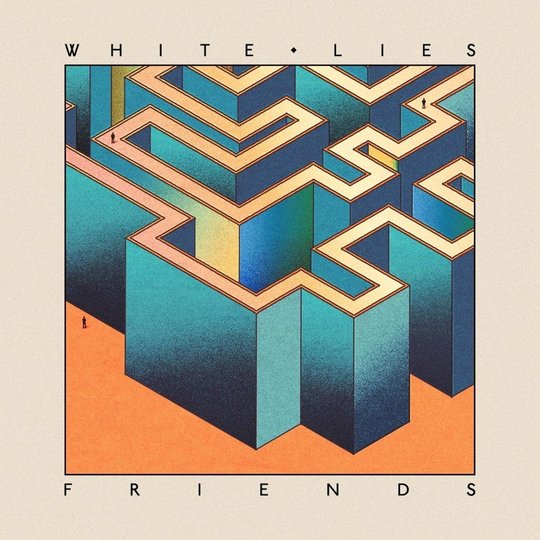 There are certain things, like wine and cheese, that get better with age. They mature and develop new flavours. Each time White Lies come back, part of me hopes that they too will have changed for the better. I listen to the first few songs and get excited, because while they may not be any different to the material they’ve put out before, they have some life and energy behind them. And then all of a sudden the album’s over and I emerge from a trance like state, wondering whether I’ve finished the album or the same song has accidentally been on repeat for the last hour. Friends is no exception.

The opening song, 'Take It Out On Me' brings a fun, chirpy sound that you don’t often expect from the band. It doesn’t take long for Harry McVeigh to starts singing lyrics such as “I’m in love with the feeling of being used”, for you to be quickly reminded that you’re still listening to doom and gloom White Lies. 'Morning in LA' provides a slight respite from the misery, and 'Hold Back Your Love' has a fun element which gives a little hat tip to Seventies disco and Eighties synth. Finally, 'Don’t Want to Feel It All' contains an unexpected riff which reminds you that the band are great at knocking together a catchy melody. What’s great about the beginning of Friends is that there’s a fabulous juxtaposition between fun and misery, something that White Lies do so well.

The turning point comes with the near-six-minute 'Is My Love Enough?' I’m not sure about your love Harry, but three minutes of this song would have been more than enough. It’s the moment when all the fun and energy of the first few songs is sapped, and the album starts dragging. 'Swing' is another example where the band have overstayed their welcome on a song. At five and a half minutes, it feels monotonous, tired and sterile. It could have done with two minutes shaved off, especially when the last one-minute-and-45-seconds contains the same refrains repeated over and over again. By the time the album is finished, you feel exhausted. White Lies sprinted out the blocks for the first 20 metres, and then stumbled and fell over hurdles before collapsing at the finish line.

Friends is an album created while the band were transitioning from one label to another. Indeed when they started the album they were free from the deadlines and budgets that record labels inevitably impose. Yet, at what’s arguably one of the most formative stages in an albums creation, the band lacked any guidance in terms of creative content. This is not always a bad thing because it means you suddenly have a new found freedom to be creative, and step out of your musical comfort zone. You don’t have a label, or any one else for that matter, expecting a certain sound. Unfortunately, instead of producing an album that feels new, exciting, and refreshing - exactly what you’d expect from a band in their position - you get some lazy attempts at something different, before a retreat into the comforts of a tried and tested sound.

It seems like they’re unwilling to step out of the formula that flung them out of obscurity when they released To Lose My Life back in 2009. The irony in this, is that according to bassist and lyricist Charles Cave, Friends is based upon the changing friendships the band have noticed as they and their peers get older: 'In the past couple of years, we’ve noticed friends’ life situations causing them to make big decisions – marriages, kids, moving out of London'. While their friends may have moved in new directions, the band have largely stayed the same.