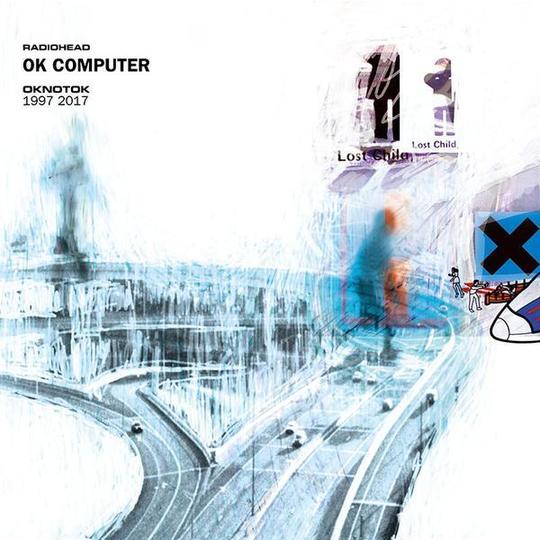 I am now reaching advanced enough years that twentieth anniversary reissues of records are now all of stuff that came out when I was a teenager. Which is depressing, and a bit weird, and also I wonder how accurate my memory is.

Still, to this thirtysomething perhaps the most remarkable thing about Radiohead’s OK Computer is what a unifying record it was and remains. By any measure, it’s fairly outré: dark, chilly, numb, difficult, clearly no longer the gifted but conventional band who made Pablo Honey and The Bends. It’s also by far their biggest seller.

It was by no means the only weird album to be a mainstream hit in the Nineties. But whereas the likes of Nirvana’s In Utero, REM’s Monsteror Blur’s13 were essentially hits because their makers had large fanbases gained from more commercial fair, Radiohead’s third album didn’t piggyback on The Bends, but totally eclipsed it.

It’s easy to look back on 1997 as the year everyone grew sick of Britpop, and it’s easy to look on OK Computer as an embodiment of some sort of nagging pre-millennial tension. But I suppose looking back on it, it was just a good time to release a really good rock album: six years of grunge and Britpop had left guitar music critically and commercially dominant in a way that’s almost inconceivable now. Philistine as both of those scenes might have been in some ways, they probably moved the Overton window for band music a ways to the left.

Radiohead were already on a commercial roll – ‘Street Spirit (Fade Out)’ had gone top five scarcely a year earlier – and made one of the all time great albums at just the right time. It was a walloping great hit – with three walloping hit singles – in a way it might not have been a couple of years later (certainly I doubt Radio 1 would have supported them quite so relentlessly).

So is it the last of Radiohead’s ‘indie’ albums? Certainly reactions to last weekend’s Glastonbury set suggest it remains the band’s last acceptable album to a fair chunk of the British public. It and The Bends are probably the only Radiohead albums to have reached a general audience, as opposed to a very, very, very large cult one. But in truth OK Computer has far more in common structurally and spiritually with the band’s next four albums than The Bends: the dizzying ambition, the questing structures, the frozen textures, and Yorke’s transition from young man’s angst to a caustic, semi-abstract paranoia. Any individual song from OK Computer could slot seamlessly onto Kid A or Amnesiac.

With hindsight the stylistic shift from The Bends to OK Computer was much bigger than OK Computer to Kid A. But at the time the embrace of electronica on Kid A seemed shocking in a way that’s hard to understand in our current, more pluralistic era (as much as anything else, it was just bloody expensive to have diverse tastes back then). That, combined with the 2000-era band’s increasing awkwardness – again, it’s easy to forget that they refused to release any singles from Kid A, and only toured in their own logo-free tent – gave the impression of a seismic break from their past, when really it was the hugely popular OK Computer that killed off indie-Radiohead.

But it might not have been this way. OKNOTOK is a two disc remastered reissue that combines the original album with its attendant B-sides, plus the main attraction, three songs – ‘I Promise’, ‘Man of War’ and ‘Lift’ – that have never formally been issued. There has been a lot of speculation over the years about these tracks, with ‘Lift’, in particular, often cited as some sort of surefire megahit that got away. Given the band have famously revisited unreleased songs from the era well over a decade later (‘Nude’ on In Rainbows and ‘True Love Waits' on A Moon Shaped Pool) it’s not totally mad to have held out hope for ‘Lift’ or any of the others to emerge as formal album tracks. But their appearance here suggests Radiohead have finally drawn a line in the sand.

What is fascinating about the three songs is how they reveal that the finished OK Computer to not tell the whole truth about the band’s songwriting at the time. Put simply, any of them – and certainly all of them – would have fucked up the album’s wintry avant-gardisms. ‘I Promise’ is a lovely, heartfelt acoustic ballad with a martial drumbeat and swelling string section. The grandiose-bordering-on-OTT ‘Man of War’ sounds like Bends-era Radiohead writing a Bond theme (ie basically the opposite of ‘Spectre’, their Moon Shaped Pool-era almost-Bond theme). I’m not convinced this Nigel Godrich version of ‘Lift’ would have been a big hit (though Bends producer John Leckie might have given Yorke’s vocals a more FM-friendly growl) and certainly it’s the most OK Computer-y song of the three, but it’s the massive, jangly chorus clearly did for it (the band have admitted as much, citing the over-enthusiastic reaction of Alanis Morissette’s audience when they supported her on tour as a reason for shelving it).

It’s almost impossible to imagine that the Radiohead of 2017 even use the correct instruments to write songs of this ilk, but 20 years ago they could have followed The Bends with, I guess, a more ballady version of The Bends. But they didn’t, and while it seems hard to believe they wouldn’t have dived into the leftfield eventually, would they have really had the confidence to go as far?

The remaining eight tracks on OKNOTOK comprise B-sides which were pretty easy to get hold of already – all but two of them were already compiled on the Airbag/How Am I Driving EP. But if the three unreleased songs were the main event, then there’s no harm at all in backing them up with this interesting grab bag of contemporary tracks.

The B-sides again reveal OK Computer’s numb imperiousness to only show one possible version of the band, though as a rule they tend to show Radiohead to have been well on their way to Kid A. In quick summary: ‘Lull’ is lovely, an angsty, twinkling like between ‘Airbag’ and ‘No Surprises’ that sounds like it might have made a slightly less obtuse album opener; ‘Meeting in the Aisle’ is a slight but intriguing instrumental excursion that hints at later albums with its dissonant strings and metronomic drums; ‘Melatonin’, a barely-there ballad in which Yorke is almost drowned out by primitive, shimmering synths is not especially substantial but unutterably lovely, and a clear hint at the future; ‘A Reminder’ is a foggy, mumbled acoustic jobbie overlaid by what sounds like samples of a party drifting in from elsewhere and is, again, magnificently atmospheric if a touch thin; ‘Polyethylene Parts 1 & 2’ sounds fascinatingly like old skool guitar rock Radiohead given an avant-garde production. The dense, cascading ’Pearly’ sounds a lot like the last third of ‘Paranoid Android’ expanded into its own spin off song and is pretty cool. ‘Palo Alto’ is a loose, loopy, noisy song that sounds like Amnesiac gone glam rock and feels like a harbinger of a semi-jolly future that never happened. And ‘How I Made My Millions’ is an absolute stone cold classic, a stark, skeletal hymn of yearning that probably deserved bigger things but remains magnificent, a delicate, half-cracked forbearer of ‘Videotape’.

I’ve purposefully said very little about the music on OK Computer proper because I’m not sure there is a lot unsaid. It is untouchable and timeless. However, I suppose if you’re actually going to spend money on OKNOTOKAY you’re more likely to be doing so to buy the remastered album that to accumulate three rare songs and some B-sides. But it’s not a cynical reissue and indeed it's an eminently worthwhile one for serious Radiohead fans – and I’m not sure there is another sort.