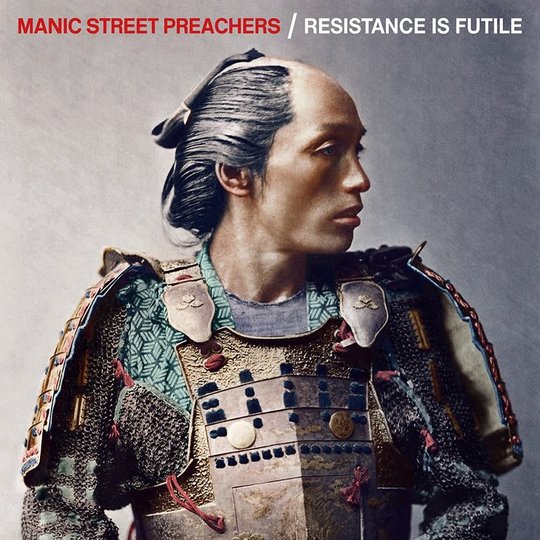 When Manic Street Preachers released a surprisingly swift and disparate pair of records in Rewind the Film and Futurology in 2013 and 2014, it felt like the final spasm of creativity of a band who were approaching the end of their third decade together. This period had the air of a victory lap, warming up with a satisfying showcase of their finely honed wistful side before lurching into an almost exaggerated display of how they could still break new ground. An album as forward-looking as Futurology really would have been a perversely logical place for a band like the Manics to call it a day too. In the end, though, it turned out not to be a last hurrah, and Resistance is Futile marks the thirteenth album from a band who initially only promised one.

Maybe they’ve been around for so long now that we inevitably take them for granted, but it almost feels like the diversity of the Manics’ back catalogue gets overlooked. Perhaps that’s because they’ve revisited familiar territory on a few occasions in the last decade, with Postcards From a Young Man and Send Away the Tigers evoking Everything Must Go and [Rewind the Film’s tone bearing a resemblance to This is My Truth Tell Me Yours. By-and-large, though, the 26 years since Generation Terrorists have seen numerous stylistic twists and turns. There’s definitely been the odd misstep, but I’ll always find them ten times more interesting than the any other arena-level bands.

The opening lines of Resistance is Futile herald warning signs, though. When James sings "People get tired. People get old", it elicits a similar sentiment to the lesser moments of 1999’s unlikely super-hit This is My Truth, which occasionally felt like different ways of saying ‘we’re knackered but we’re doing our best’. ‘People Give In’ eventually clunks a gear or two higher but it’s a curious choice of opener all the same, presumably aiming for majesty but landing on inertia instead.

Once ‘International Blue’ kicks in, though, it becomes abundantly clear that there’s life in the Manics yet. If you asked a casual observer what a typical Manic Street Preachers song sounds like, chances are this is the sort of thing they’ll have in mind. James Dean Bradfield’s huge melody instils it with all the appeal of the band’s finest arena-filling singalongs, while Nicky Wire’s lyrical tribute to French artist Yves Klein is among his most focused work in years, making it a worthy sister song to ‘Interiors (Song for Willem de Kooning)’ from Everything Must Go.

These aren’t the only times on Resistance is Futile that the ghosts of old songs and bygone days loom heavily. Even by Manics standards, this is a pretty nostalgic record. ‘Liverpool Revisited’ isn’t their first song about Hillsborough, but it’s certainly their best, a gorgeous love letter to the 96 and those who fought for 20 years for justice on their behalf. Lyrically, it’s another strong piece of work by Wire, blending wistfulness and anger, as he eulogises how “The light dances on the Mersey” and lamenting “All the hatred they tried to throw at you, but you stayed so strong”.

While James Dean Bradfield has never been shy of sharing vocal duties, his willingness to cede control of the mic has been even more pronounced in recent years, with duets cropping up more frequently than ever. The Anchoress joins a strong cast of collaborators on ‘Dylan and Caitlin’, and her inclusion is an inspired choice with her rich voice blending luxuriously with the sumptuous strings and the none-more-Manics refrain of “Together the tenderness cries”.

It’s a shame then, that a record with such impressive peaks should be hamstrung by its less inspired moments. The likes of ‘Sequels of Forgotten Wars’ and ‘Hold Me Like a Heaven’ drift by without much to cling on to, and these aren’t isolated examples on the album’s second side. They’re not bad songs as such but pretty forgettable and it’s hard to shake the feeling that the album noticeably runs out of steam. That’s quite frustrating when it contains such life-affirming evidence that the Manics’ creative flame continues to burn brightly. Being a Manic Street Preachers fan was never a smooth ride, though, and Resistance is Futile is another curious chapter in the story of a band whose imperfection is one of their most endearing features.