This Is My Truth Tell Me Yours' 20 Year Collector's Edition 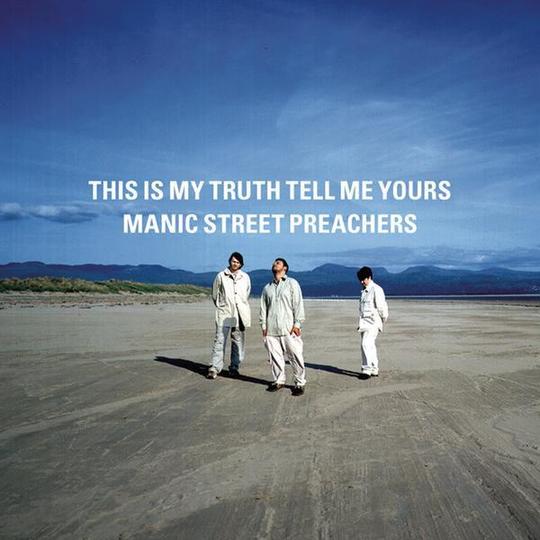 This Is My Truth Tell Me Yours was a landmark record in many ways for the Manic Street Preachers. With Britpop on the decline and its main players having reached a creative stagnancy, they'd become arguably the biggest band in the UK at this point. After the success of Everything Must Go which not only relaunched the band but also opened them up to a brand new audience, This Is My Truth... provided a gateway to the next level. Shifting over 100,000 copies in its first week of release as well as spawning the band's first number one single in 'If You Tolerate This Your Children Will Be Next', it also brought them recognition at the BRITs where they picked up awards for Best British Group and Best British Album.

On the flipside, it also polarised the opinion of their existing fanbase, particularly those who'd discovered the band through the lyrics of Richey Edwards and often brutally uncompromising sonics that accompanied them. While musically This Is My Truth... undoubtedly appeared to be a little more reserved than its predecessors, the lyrical subject matters were no less compromising. Themes such as the Spanish Civil War ('If You Tolerate This...'), ‘The Silent Twins’ of Haverfordwest ('Tsunami'), Hillsborough disaster ('S.Y.M.M.'), the Treweryn floods ('Ready For Drowning') and depression ('Black Dog On My Shoulder'). Aside from those, they also touched on the disappearance of Richey Edwards for the first time in song with the heavier and therefore somewhat out of place 'Nobody Loved You' ("It's unreal now you're gone").

Their truth was one of desolation, darkness and despair. A band still coming to terms with the loss of someone they'd known from their school days yet perversely now a bigger draw than they'd ever been.

It probably goes without saying as a long time Manic Street Preachers diehard I've never encountered anyone from the band's fanbase who's named This Is My Truth Tell Me Yours as their favourite record. It tends to be one of those albums that sits uncomfortably around the mid to lower point of most people's top tens. An album where much of side two has been uncharacteristically forgotten about. Mainly because the singles aside, few of the tracks that make up This Is My Truth... have featured in the band's live sets since the initial tour to coincide with its release 20 years ago.

Looking back, it actually marks the start of their most ambitious and experimental period. The punk and metal phases that dominated their first two releases having been long confined to the archives, This Is My Truth... is the sound of a band brimming with ideas. Having already implemented strings (albeit briefly) on both Everything Must Go and Gold Against The Soul two and five years earlier respectively, there is significant extra instrumentation beyond straightforward guitar, drums and bass dominate proceedings here. Keyboard player Nick Naysmith, soon to become a permanent feature of the band's live set-up features on all but three songs. Listening to the accompanying live rehearsals CD, his Wurlitzer is even more prominent, particularly on 'Ready for Drowning' which sounds not that dissimilar to Procol Harum's 'Whiter Shade Of Pale' in demo form.

Some of it works and stands the test of time. Others don't and end up losing focus, partly due to the arrangement overpowering the song itself ('Be Natural' and 'S.Y.M.M.' being two that immediately spring to mind). Of course, their full-blown foray into more experimental waters would come on both This Is My Truth...'s successors, 2001's Know Your Enemy and 2004's Lifeblood arguably among the least popular records from the band's thirteen albums strong canon.

So here we are, twenty years and three months on from This Is My Truth Tell Me Yours initial release. As with a number of their releases (although disappointingly nothing for Gold Against The Soul as yet) the Manics have chosen to put out a commemorative anniversary package. The triple CD box set including a whole one of previously unreleased demos represents good value, particularly when comparing and contrasting the versions which made it onto the finished product and those that didn't. The album itself has also been remastered, which perhaps wasn't that necessary. Even more interestingly, 'Prologue To History', originally one of the b-sides on the 'If You Tolerate This...' single finds itself promoted to the album. Replacing the aforementioned 'Nobody Loved You', it sits almost uncomfortably in penultimate spot between 'Black Dog On My Shoulder' and 'S.Y.M.M.'.

In hindsight, there's little doubt the band were quite prolific at this stage. The third CD features five of the b-sides that accompanied the singles off the album, and it's probably fair to say all could possibly have found a way onto this or This Is My Truth...'s successor. ‘Montana/Autumn/78’ fuses their older sound with a more futuristic one that would become apparent in later years, while Naysmith's keyboards come to the fore once more on 'Black Holes for The Young' which also features a young Sophie Ellis-Bextor (then singer with Theaudience) on dual vocal duties. Meanwhile, 'Valley Boy' with its Euro scepticism in lines like ("Idle and out of touch in Europe, nothing's gone and nothing's changed") sound alarmingly prophetic now, albeit in a different context. 'Buildings for Dead People', a song which appeared on the b-side of 'Tsunami' nearly a full year after the album's release and 'You Stole The Sun From My Heart' flipside 'Socialist Serenade' don't pack the same resilient punch as the others, but their inclusion is welcome all the same.

The first half of CD3 features a host of remixes from an era when at least one remix was the norm. In many cases purely for contractual reasons, but more often than not, as filler to justify more than one edition of a single to be released and therefore ensure a high chart position for consecutive weeks. Mogwai's take on 'You Stole The Sun From My Heart' stands out as the most interesting version here, an alliance no doubt constructed during the album tour when Stuart Braithwaite and co would endure the full wrath of the Manics' hardcore fanbase while opening for them every night. Massive Attack's eerie reworking of 'If You Tolerate This...' is also worth hearing once more, as is the Manics' take on their 'Inertia Creeps' if you can track a copy down.

None of the live tracks which also appeared across various formats of This Is My Truth...'s singles are included, which is a shame as there was no better live band anywhere on the planet at this point. Nevertheless, this is a rewarding compendium if only as a means of re-evaluating an album that was promptly dismissed by some, yet when all's said and done, in many ways years ahead of its time.

Love in the Time of Lexapro