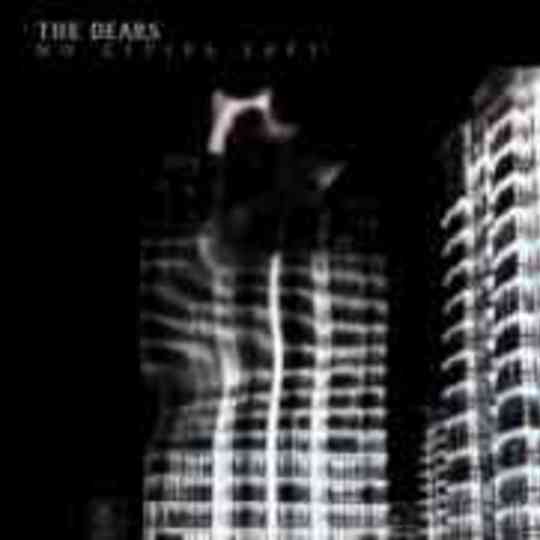 It's been a busy year for Canadian band The Dears. Since 1995 they've ploughed a relatively lonely furrow in their homeland, releasing a couple of albums and EPs along the way. It wasn't until this year's SXSW festival in Austin, Texas, however, that anyone really began to take notice. Suddenly, anyone who was anyone wanted to sign The Dears and Bella Union emerged victorious. Crucially, however, unlike their new label-mates Explosions In The Sky, The Dears look set to take this side of the Atlantic by storm with this intense and epic album.


'No Cities Left' first emerged in Canada last year. The band have been compared to Morrissey and Blur, a comparison that lead vocalist & songwriter Murray A Lightburn agrees with – it's undeniable. He does sound like Morrissey. That’s just his natural style, he assures us, as he sang like that before he'd even heard of The Smiths. However, this likeness may ultimately prove to be a barrier for anyone with a remote dislike for Mozza's distinctive downbeat lyrical approach and vocal emphasis. It would be a shame, though, as they'd be missing out on some of the best alternative popular (is that possible?!) music of the past few years.


A lengthy release (clocking in at over an hour), 'No Cities Left' has no trouble grabbing the listener with a classic 1-2-3 sucker-punch. Recent 7" single 'We Can Have It' opens before moving onto the wonderfully titled 'Who Are You, Defenders Of The Universe?' – a song that could have been a single from Deus' 'Ideal Crash' album, but 'Lost In The Plot' is where it really gets to you. A powerful guitar intro and a bridge of 'I promise not cry anymore' take you to the anthemic chorus that's sung with true conviction: 'Oh it’s the same old plot to these things', taking you back to somewhere in the mid-90s in the process. It nearly doesn't matter what the rest of the album sounds like, but there's still nine songs remaining to surprise and occasionally delight you.

'Don't Lose The Faith/Cos She's A Tourist' is a fantastic and epic string-led dark encounter, rousing to a crescendo of noise, before leading into the equally noisy intro of 'Pinned Together, Falling Apart'. 'Warm And Sunny Days' is a lovely pop song that harks of latter Boo Radleys, but the album doesn't quite win on all fronts. It too often veers off at a tangent, with songs either being unnecessarily lengthy ('Postcard From Purgator') or overly jazzy with suspect lyrics: ('The Second Part': 'I then arrived/Ten minutes early with no smokes/And I was broke/without a smoke’). These weaknesses fail to detract from the fact that something truly special has finally found its way before us. We have a new pop god to worship in the from of Murray A Lightburn and he should be bowed down to for making one of the most interesting records to come before this reviewer in years.

I Can't Stand To Stand Beside You