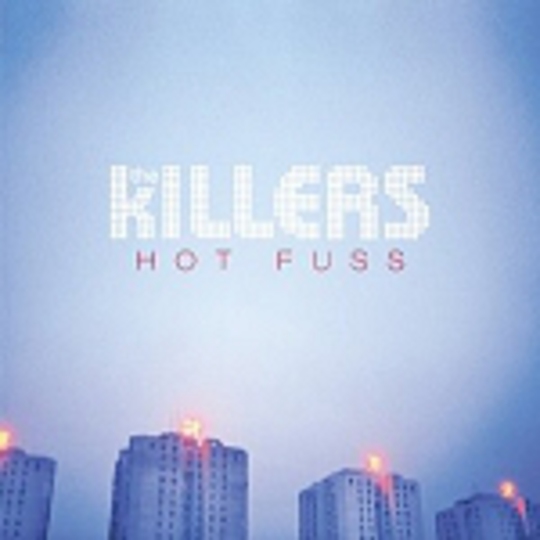 'Hot Fuss' indeed. With their gigs selling out all over the shop, and every indiekid worth his salt clamouring for a piece of The Killers, the Las Vegas fourpiece could scarely have picked a more apt title for their debut record. Fans won't be disappointed; they offer few surprises but pop pickings a-plenty.

At first listen it's hard to tell if we're hearing the seeds of greatness from a potentially - and deservedly - huge pop band, or the full extent of their talent. 'Hot Fuss' takes few risks. The Killers know their winning formula backwards, and they're not about to waste precious minutes experimenting with it in the hope of producing gold; they're happy enough with the glittering sheen that dusts the eleven pop songs presented herein.

Not that they lack anything on the surface. 'Hot Fuss' plunders the eighties with sequin-clad glee, yet avoids the trap of sounding dated; 'Somebody Told Me' is - no arguments, quiet at the back - the best pop single of the year so far, and opener 'Jenny Was A Friend Of Mine' throbs with delicious melodrama. Lines like "she couldn't scream while I held her close/I swore I'd never let her go", frantic, bleeding-heart synths clawing at the ankles of towering distress-call guitars, bound up by a pummelling rhythm section, and all of it sighing and raging at itself and indeed everyone who cares to listen. What's not to love?

Their clever sense of rhythm is where they come into their own. 'Mr Brightside' would be a pleasant but unremarkable plod-along but for its peculiar tempo; its sense of being rushed along too fast adds the panic and desperation that makes it such an addictive, wrenching song. Elsewhere, on the splendidly named 'Andy, You're A Star', rhythmic, tinny guitars flick and hover along the surface of the melodies and linear, synthy basslines, their detachedness providing cool contrast to the dubiously named Brandon Flowers' overwrought vocals. His voice is a distinctive, elastic holler, never more than on the brazenly overblown 'Indie Rock And Roll'. One can imagine the scene in the studio, arms flung out in every direction, fists thumping chests with theatric abandon, as again and again and again, he howls "it's indie rock & roll for meeee... it's all i need". It's absolutely ridiculous, but they pull it off with gorgeous aplomb.

The Killers take those two pop staples - a killer [ahem] hook, and reams of frustrated, woe-is-me angst - and staple them together with no small amount of confidence. Singing about jealousy, murder accusations and that ever-reliable subject, the misery of love, they nick Stellastarr*'s pop suss, forthrightly stripping it of all irony and intentional camp. In less capable hands the results could be unsophisticated and cringeworthy - as it is, they team the neon luminosity of Duran Duran with the camp, boyish charm of Dexys Midnight Runners - and are as likeable as either of them.

Yet even the most enduring pop songs have a horizon; hours of repeat listening will eventually kill off the euphoria that 'Hot Fuss' initially inspires. Exquisite as it is, it has a disposable anti-quality to it that denies it the potential accolade of "classic debut". Perhaps it's merely cynical pessimism speaking, but current and essential as it now sounds, it remains to be seen whether the same can be said in a year's time. One genuinely hopes it can - it's the kind of wonderful record that should be savoured minute by minute. Adore it while you can.