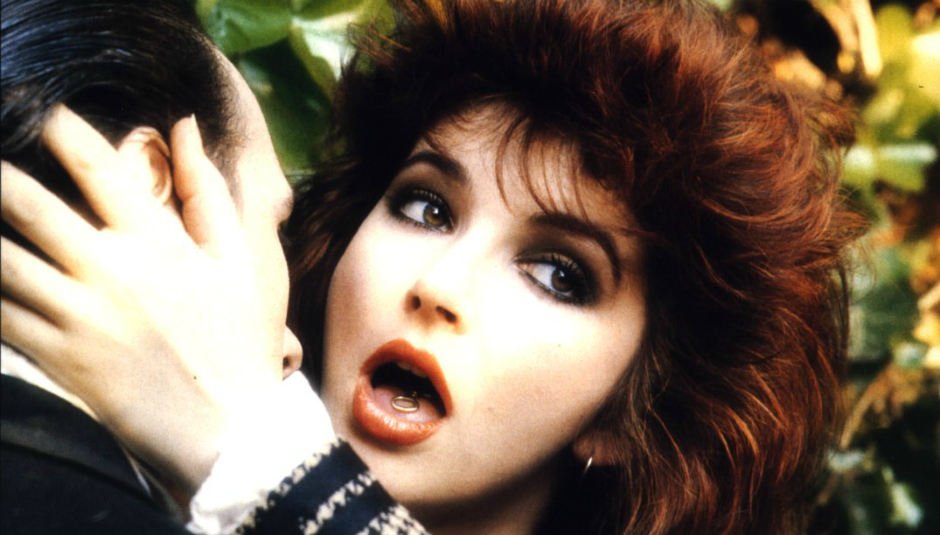 The Friday Fangasm: The Dreaming by Kate Bush

The Friday Fangasm: The Dreaming by Kate Bush

Never for Ever, the third album by Kate Bush, is a curious beast. Bush maintains her often childlike voice, first heard in explosive fashion in 1978 on ‘Wuthering Heights’, and the pop production still abounds. But dig a little deeper and you’ll find almost progressive melodies and a storyteller continuing to develop in ever-expansive and brave new directions, drawing in influences from film, literature and classical music. ‘The Infant Kiss’, inspired by Jack Clayton’s 1961 film The Innocents, told the tale of a governess frightened over her feelings for a young boy in her charge, while ‘The Wedding List’ was influenced by Francois Truffaut’s 1968 film The Bride Wore Black. English composer Frederick Delius became the central figure of ‘Delius (Song of Summer)’, while the record’s closing one-two of ‘Army Dreamers’ and ‘Breathing’ tackled a mother’s grief over the loss of her young son killed in military manoeuvres and the aftermath of a nuclear holocaust respectively.


Nevertheless, Never For Ever was a commercial and critical success, entering the album charts at number one. ‘Babooshka’ went top five, and remains one of Bush’s biggest hits, while both ‘Army Dreamers’ and ‘Breathing’ both made it into the top 20. The album itself was also very widely praised by the critics, despite departing sonically from her earlier two albums. It was still, in essence, quite sweet, maintaining some of the charms that peppered The Kick Inside, deviating into new realms at times, but still maintaining a comforting sense of familiarity. Nothing of that kind could be said of The Dreaming, the record that even Bush describes as her 'I’ve gone mad album.'

For those who only really know Bush from her most popular singles, The Dreaming might well seem insane. Even from its pounding, deeply rhythmic opening seconds, it becomes clear that it’s no ordinary Kate Bush record. ‘Sat In Your Lap’ drags you into her most avant-garde world kicking and, quite literally, screaming. It deals with existentialism and the quest for knowledge, Bush’s voice moving from languid, contemplative wonder to frustrated yelping on a whim.

The track’s pounding drums, squeaky synths, loops, and smatterings of traditional piano also hints at a much more experimental musical palette. Indeed, The Dreaming’s opening salvo is a microcosm of the record’s overall musical inventiveness; drummer Preston Heyman and Bush’s brother Paddy simulated the sound of whips by swishing bamboo canes through the air in a rhythmic manner, after all. Dive further into The Dreaming and the sheer range of sounds to be found is astonishing. Its maximalist aesthetic is heightened by the huge range of instruments employed; everything from samples and mandolins, to didgeridoos and even an answering machine are used, all set to curious time signatures. Bush also occasionally went back to her Irish roots, working with Planxty and The Chieftains across the summer of 1981. Their influence can be heard on the traditional folk elements that form ‘Night Of The Swallow’, where the traditional Irish bagpipes, known as uilleann pipes, were used. Indeed, Bush would further embrace those roots on Hounds Of Love, which is packed with the sounds of traditional Irish folk.

Perhaps the greatest joy of the record, though, comes from immersing yourself in the narratives that Bush presents, and realising how her words and the music have a symbiotic, almost dependent relationship. The Ninth Wave (her conceptual mini-record about a person drifting alone in the sea at night that formed the second side of Hounds Of Love) would later demonstrate that Bush could write a beautiful, focused narrative over the course of song cycle. But the individual tracks on The Dreaming show off some of Bush’s most fascinating short stories, spanning an ambitiously large range of subjects – it’s at times difficult to believe that she suffered from writer’s block.

‘Pull Out The Pin’ was inspired by a documentary on the Vietnam War, shot from the perspective of the Vietcong. Bush herself takes on the role of a guerrilla fighter, literally sniffing out American soldiers and commenting that they “Stink of the west, stink of sweat, stink of cologne and baccy, and all their Yankee hash” before resolving to kill her target. At the more light-hearted end of the scale, ‘There Goes A Tenner’ follows a gang of amateur robbers taking on their first big job, becoming increasingly paranoid that everything will go wrong (spoiler alert: it does). The track is brought alive not only by Bush’s words but also her performance; she puts on a fake cockney accent and fully embeds herself in the role, transporting the listener into the heart of the action.

Perhaps the most famous moments of lyrical magic come toward the end of the LP though. Stephen King’s novel The Shining was the driving force behind the shuddering closer ‘Get Out Of My House’, but while it is set in some form of hotel (there’s a repeated mention of the concierge), Bush’s take on King is even more disturbing than the novel. While the house still remains the source of madness (“This house is as old as I am / This house knows all I have done”), and the thunderous percussion only heightens the sense of dread, it’s not the most horrifying element of the track. There’s nothing that inspires more innate terror than hearing Bush and her fellow musicians begin to aggressively bray like donkeys, as if possessed by demonic spirits.

The supernatural also surrounds arguably one of the album’s most accessible tracks, ‘Houdini’; Bush had become fascinated by the escapologist’s life outside of his own magic tricks. Houdini himself had spent many years attempting to expose mediums and séances as fraudulent. As such, he and his wife Bess devised a secret code, so that if either of them died and the other attempted to reach out through a medium, they would be able to know if genuine contact had been made. In 1929, it was reported that Bess had made contact with Houdini, though she later believed that the code had been leaked and that she’d been deceived. Nevertheless, Bush took the story and told it from Bess’s point of view, both at the séance itself and in flashbacks to her acting as Houdini’s assistant. It’s by turns wistful and mournful, with Houdini’s code of “Rosabel, believe” becoming a touching symbol of love both in this world and the next. Bush vocalises Bess’s distress at seeing her husband struggle with his illusions and dragging him from the water by gutturally intoning her lyrics. She ate two bars of chocolate and downed a pint of milk before singing. She also sped up the music before recording over it to achieve the perfect distressed tone when the finished track was eventually played back at normal speed.

The Dreaming is therefore tirelessly imaginative, asking the listener to submerge themselves in a wealth of illusory and semi-fictional realms. But it’s also remarkable for what happened behind the scenes as well. Bush had made steps into production before, on the EP On Stage and on Never For Ever, where she was aided by engineer Jon Kelly. Here though, she took the bold step to produce the entirety of the album alone. While she did collaborate to some extent with a few engineers (such as Nick Launay, who had previously worked with Public Image Ltd and Phil Collins), the control that Bush had on the record is plain to hear at every twist and turn. She extensively made use of the Fairlight CMI – one of the earliest workstations with an embedded digital sampling synthesiser – and a number of other state-of-the-art machines when recording.

She didn’t look back. In 1983 she built her own 48-track studio in the barn behind her family home, using it to start demoing and producing what is often considered to be her magnum opus, Hounds Of Love. There, she would occasionally channel some of the experimental spirit that defined The Dreaming (especially on its conceptual latter half), but it was far and away more commercially and critically successful, often being hailed as Bush’s best record. Hounds Of Love was nominated for four gongs at the 1986 BRIT Awards: Best Album, Best Female Artist, Best Single (for ‘Running Up That Hill’) and, perhaps most significantly, Best Producer.

The Dreaming, by contrast, remains the overlooked jewel in her canon. But while it may be challenging and uncompromising, it’s almost hard to imagine what Kate Bush would be like today if she hadn’t released it. A staggeringly bold step forward for her as a singer, songwriter and producer, The Dreaming was a milestone both for Bush herself and the wider world of music.

The Friday Fangasm: Elliott Smith by ...