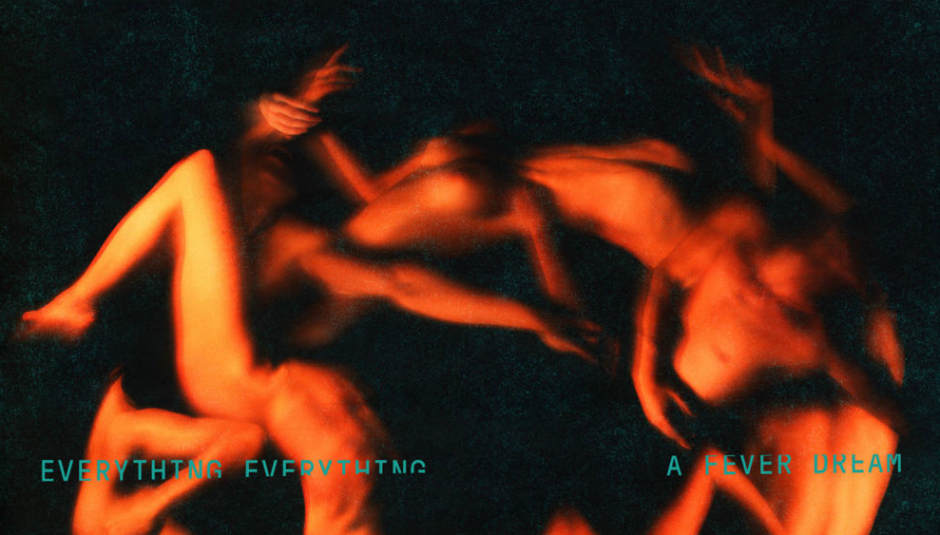 The Mercury First Listen Review: Everything Everything

The Mercury First Listen Review: Everything Everything

Aidan Reynolds on Everything Everything's A Fever Dream

Okay. I’ve got headphones, a laptop and a jug of David Lynch coffee (which has been proven to make me go a bit weird). Apologies in advance. Some background: I loved Get To Heaven but was cold on ‘Can’t Do’, and as a result never got round to the rest of A Fever Dream. I assume it was well-received, given the Mercury nod, but I’ve read no reviews and am fully ignorant about its contents. Let’s remedy that, live-blog style. Aside from the typos, I promise to change nothing.

Arpeggiator intro seems appropriate for this band, and that bassline is nice. Ouch, that synth is unadulterated filth, like a cross between the siren from Alien and some nightmare pillhead morning. Is he singing about nuclear war? You know when people go on The X Factor and its ilk, slow down a pop song and get a standing ovation, like we were all too stupid to know Sia’s ‘Chandelier’ was always one of the saddest songs in the world? This is the exact opposite of that. Everything is awful, but we’re going to be so catchy that you physically have to listen to it. It’s exactly what I loved about their last LP: screaming sheer terror with a bouncy backdrop.

I’m still not entirely on board with ‘Can’t Do’ but it kind of makes sense to put it after ‘Night Of The Long Knives’. I missed the “Just want to be on my own” line when I heard it before, which seems to make it that much more impotent. Hello, ‘Desire’, and welcome back angry synth man. Who produced this? Hold on... Ah, I see you, James Ford. I fucking see you. This chorus is a bit Muse, isn’t it? Just on the right side of ‘Drones,’ thankfully.

‘Big Dream’ is here now, and we’ve gone back 10 years to ‘In Rainbows’. Twinkly like ‘Nude’ but with some seriously angry lyrics. Are they about Trump, and what was that line? “Witless and rank as a fat-filled hole”? If so, that’s marvellous. Now there’s some meathead guitar riff in my life, like a Fisher Price Rage Against The Machine. Or, as they’re now known, Royal Blood. ‘Good Shot, Good Soldier’: now there’s an ominous title. Some lovely Warp-ish stabs alongside the bass. I like this a lot. “I’m the best of the apes” is about right, my man. You can’t trust people. People buy unsmoked bacon and voted for Brexit.

Wait a sec, are we now in the era of Brexit-rock? God, I hope so. The bottom just fell out of the pre-chorus and now I want to cry. Don’t try to draw me back with your anthemic ways, fellas – you’re still singing about annihilation. “My skin is a dust cloud”. Fucking hell. ‘Run The Numbers’ is definitely a Gove-ian response; there are some more low-end riff times pinned to a properly ridiculous chorus and a guitar solo that merges into a digital noise that may have come from Super Mario Bros. Forget my earlier conclusion, I think I actually love this.

My word, this next one is sad. I don’t think Everything Everything have connected with me this much before, and I think I now know what this record is: it’s Hail To The Thief, but 15 years later, information-addled to the point of mania and seething that absolutely nothing has changed, except for the worse. “They celebrate all of the same days / And you see them all doing the garden / But they’re nothing like you and me” is one of the most crushing sentiments I’ve heard all year, solely because it sounds Orwellian, paranoid, and completely plausible all at once.

Now we’re in the back half of this LP, it seems to be doubling down on the disgust. “I hate the neighbours / And they hate me too / The fear and the fury make me feel good”. “How did we get here? / And how do we leave?”. This is eyes-wide-open helplessness, but now the house piano motif makes me want to dance. Although that could be the coffee. I’m sorry you had to read this.

“Pin the bunting on the gallows / Dance around it with your blackface on / We all made a vacuum for this / Come and crush me in the Waitrose aisle / The world is my ashtray tonight”. I truly hope the Mercury judges have the bottle to crown this album the winner. This or Nadine Shah, anyway. I’m loving all the Radiohead nods – that ‘Ivory Tower’ breakdown is total OK Computer Greenwood, but then ‘New Deep’ rolls into view and it’s A Moon Shaped Pool (the lack of hyphen in that title still renders me immobile with rage), before ‘White Whale’ draws from the swells of ‘Pyramid Song’ to ratchet up the afterlife vibes.

I don’t want you to think I’m seeking to diminish A Fever Dream’s achievements here. I’m not – this is exactly how you’re supposed to build on your influences and twist them into new shapes. “Never tell me that we can’t go further”. I’m not sure if it’s intentional, but I’m so scared of that line. It’s over, we’re done. I’m supposed to be going out tonight, but now I feel terrible. Thanks, guys. Seriously, I mean it.

For more information about Everything Everything, please visit their official website.

The Mercury First Listen Review: Ever...