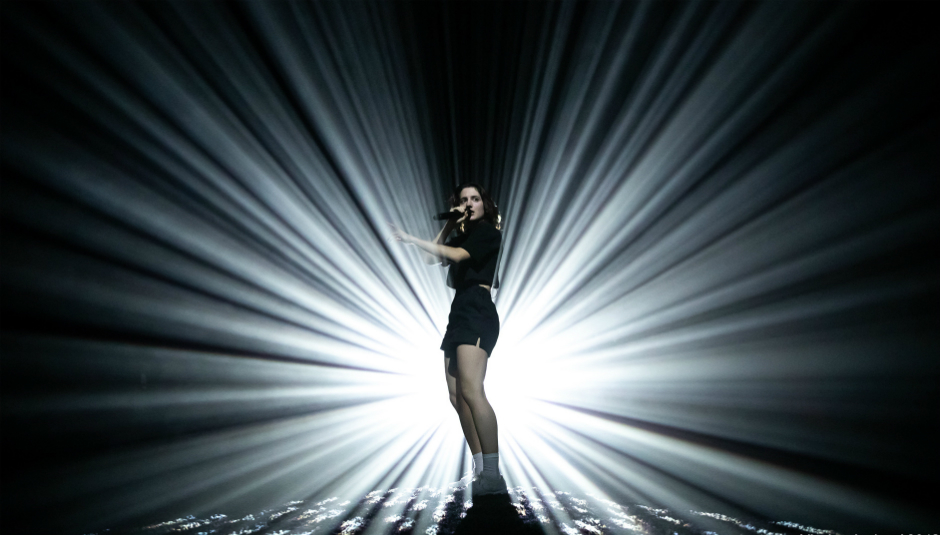 Most of the world’s showcase events like this one – characterised by dozens of up-and-coming bands, hordes of press looking to sniff out the next big thing, and throngs of intrigued locals for looking for something fresh – have been established relatively recently. Trans Musicales, though, has been running in Rennes every year since 1979, and by now it has the back story to prove it. Wandering around the food and drink hub at the heart of Parc Expo, the sprawling series of former aircraft hangars that have housed the festival since its inception, you can feel the weight of its history; the walls are lined with photographs from years gone by, weaving a telling tapestry of Trans’ rich tradition.

There’s a young Dave Grohl playing an early European Foo Fighters show, and then an even younger Dave Grohl behind the kit with Nirvana. Bjork’s there twice, too; with The Sugarcubes in 1988, and out on her own in 1993. Beastie Boys, DJ Shadow, and Sonic Youth are all on the American roll call, whilst France is also well-represented; there’s a striking glimpse of a pre-helmet Daft Punk. More recent shots capture M.I.A., Janelle Monae, and Benjamin Clementine among others. You get the sense that, with this sort of track record for helping to break new acts, Trans doesn’t have a great deal more to prove. They can afford to take risks with their lineup and offer up something genuinely eclectic.

That’s a theory borne out over the course of this year’s edition. It’s the fortieth, although with the anniversary not officially until next year, you get the sense that everybody is taking the milestone well and truly in their stride – after all, this is a festival that’s only ever looked forwards. The Thursday alone – the opening night proper – runs the gamut from the pointed, skyward electropop of irrepressible new Dutch outfit The Cinema Escape to the gorgeously woozy dream rock of The Blind Suns, a trio boasting both French and Polish heritage that come over sounding like Mazzy Star with a touch more bite; there’s menace in the guitars and quiet foreboding in singer Dorota Kuszewska’s vocals. Later, U.S. bluesman Robert Finley delivers a delightful set in Hall 3; he’s 65, but the only thing he’s a true veteran of is the U.S. army, with his debut LP only arriving two years ago after he was discovered by Dan Auerbach of The Black Keys. You can see what drew him to Finley, too – a booming voice in the mould of Buddy Guy, and slick riffery from a tight band.

Parc Expo lies about eight kilometres outside of the city centre, close to the actual airport that most international visitors to Trans will arrive at. That makes it about a twenty-minute bus ride from downtown Rennes, and the regular shuttle buses have, in and of themselves, become the stuff of local legend; expect to find the locals in a state of advanced refreshment, rowdy but un-erringly friendly. With the music not kicking off in earnest until early evening and continuing as late as seven the following morning, the days are your own to explore the city, which is the capital of Brittany.

Sure enough, it’s quintessentially French on the one hand - the street lamps, the canals, the handsome winding streets studded with brasseries and cozy bars - and proudly Breton on the other. The old town is dominated by gorgeously quaint medieval architecture, whilst the cuisine is fiercely local, with couscous a specialty and the sensory overload France’s second-biggest market, Marché des Lices, a Saturday morning must. At the city’s Christmas market, meanwhile, the diverse food array is pleasingly cheap – as is the mulled wine.

Back at Parc Expo, there’s a similar stylistic breadth to the music on display. Friday night sees the curtain really come up with a beguiling set from PRESSYES, an Australian solo artist who comes across like their answer to Youth Lagoon – all the better now that Trevor Powers has re-tired that moniker. There’s just time afterward to swap halls and catch a similarly leftfield set from Ben LaMar Gay, a Chicago cornetist who blends hip-hop and jazz to offer up something truly avant-garde, in a style that, fittingly, recalls French acid jazz stalwarts like St. Germain. The programme takes a distinctly European turn for dancier territory thereafter, with highlights including Bruno Bellissimo, who delivers stirring evidence for his position at the vanguard of the Italo Disco revival, and Nelson Beer, a Swiss indie popper who marries the chart-readiness of Years & Years to Perfume Genius’ subversiveness. In the small hours, self-styled political pop savant Dombrance puts aside the current affairs slant of his latest project to focus on a gleefully up-tempo electro set instead.

Not that politics are ever too far from anybody’s minds this weekend, as the country gears up for a fourth successive round of gilets jaunes protests; while Paris is burning, things are more serene in Rennes, with maybe a couple of hundred good-natured demonstrators scattered around town, who can later be seen mingling amiably with State Rennais fans gearing up for the evening’s fixture against Dijon, which they’d go on to win 2-0. Otherwise, this is a typical winter’s Saturday in Rennes, and a chance, after an indulgent excursion to the Marché des Lices, there’s also a chance to squeeze in a spot of record shopping – check out Groove Rennes for rare French break records and electro fare, whilst IT’S ONLY caters for a more straightforward alternative crowd – all the way down to the Celtic shirts it sells. There’s also room for a swift craft beer tour of the city – Malouan is best for international pours and Le Coin Mousse, close to the Christmas market, for local microbrews. This time of year is a good time to box off the festive offerings from the big-hitting likes of Leffe, Affligem and St. Feuillen, too, although stick to the wine bar at the festival itself – €8 pints of Lagunitas are never an enticing prospect, and especially not while the pound's in the gutter.

Saturday feels like de facto closing night of the festival, and some of the standouts have been saved for last. Perhaps the weekend’s most out-there psychedelic turn – and there’s been no shortage of contenders – comes courtesy of Indianizer, an Italian outfit who sound as if they were born out of one of them wondering: “What would it sound like if Animal Collective started writing Can jams?” There’s a similarly pleasant juxtaposition in the form of Losange, too, a Frenchman who sets upbeat electronica and floating ambiance against each other to hypnotic effect. He’s not a million miles away from Makeness, who rocks up in time to fly the British flag, although it’s impossible to catch all of his set when it clashes with arguably the biggest over-sea draw of the weekend.

Turn up after to Hall 3 after the 11:15pm kick-off time for critical darlings BODEGA and you’ll find yourself at the mercy of the one-in, one-out system – an especially unforgiving model when nobody wants to leave. And why would they? The Brooklynites have resurrected the spirit of late-noughties dance-punk and imbued it with scything, unapologetic critiques of Internet culture. The boisterous singalong of ‘Jack in Titanic’, the controlled chaos of ‘How Did This Happen?’, the assured strut of ‘Can’t Knock the Hustle’ – they all soar, and this is a huge room that must hold about five thousand or so. This is a crowd well-versed in knowing a breakout act when they see one and their generosity of spirit towards the band tonight surely goes some way to explaining why there are so many French dates, with plenty in unfancied towns, on their 2019 itinerary. It seems a fitting way to round off a festival that’s spent four decades living relentlessly on the cutting edge; Trans’ appetite to see new ground broken remains sharper than ever.

Les Rencontres Trans Musicales takes place in Rennes, France, every December. For more information about the festival, including dates and tickets for the 2019 edition, please visit the festival's official website.