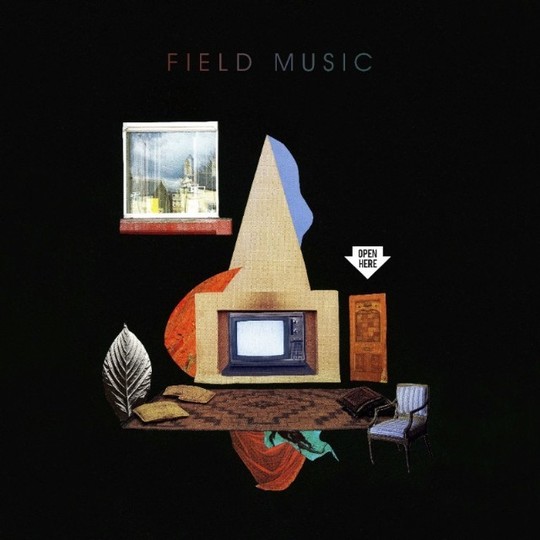 There aren’t many bands like Field Music left in this country. In their 12 years, we’ve had five ‘proper’ albums, a rarities collection, a covers record, a soundtrack to a silent 1920s documentary about fishing, a set of improvised instrumentals with Warm Digits, and at least three other projects. Christ only knows how many times David and/or Peter Brewis have popped up as unheralded members of other people’s bands too. It’s actually a little exhausting just trying to remember everything they’ve contributed to since their emergence.

Their prolificness is one thing - you can put that down to a (very) strong work ethic. What truly sets them apart from pretty much anyone else, though, is that there has never been even the faintest hint of stagnation from them. Every time they’ve ever put out a new piece of work, whatever the name on the sleeve, it’s sounded as fresh as if they were doing it for the first time. And guess what? Sixth Field Music LP Open Here sees them continuing in that same vein.

It’s probably not surprising that these testing times should see Field Music in a fairly serious mood at times, but they manage to wrap their most substantial motifs around typically playful pop. Like fellow North-Easterner Nadine Shah on her recent record Holiday Destination, they show huge empathy to refugees and other marginalised people on ‘Goodbye to the Country’ and the album’s lead single ‘Count it Up’. The latter, in particular, is a towering achievement which stands above most songs released this year and numerous others. I guess it’s a simple enough idea, bullet-pointing the things most of us consider to be basic life entitlements like clean water, freedom of expression or a lack of day to day discrimination. However, by marrying the message to a straight-up arse-wiggler of an instrumental, Field Music have somehow multiplied its power.

‘No King No Princess’ is another inspiring polemic, taking on the thorny and increasingly relevant issue of the way gender roles are enforced on children as soon as they begin to develop a personality. It reminds us in a gloriously catchy manner that “there isn’t only one way to be a girl” (or boy) and that “you can dress up how you want and you can do the job you want”. It’s immensely relatable stuff whether you’re a parent anxious about how to bring up your kids or simply nursing awkward memories of your own childhood.

The Brewis’ fondness for making us dance is pretty well established by now, but parts of Open Here see them venturing even further out onto the dancefloor than ever before. It feels at times like they’re trying to fill a little bit of the void caused by the loss of Bowie and Prince, both of whom left us since Field Music completed work on their last record Commontime. ‘Share a Pillow’ in particular brilliantly channels ‘Beauty and the Beast’ in a way that is unmistakably Field Music. The brass might be blaring as lasciviously as it can, but these boys are never less than polite when they enquire “Sugar, share a pillow. What would you say to that?”

Their adventurous spirit is in such clear abundance on Open Here, that you could almost forget that this is a band with a stronger grasp of the basics than most. Just in case, though, they remind us what they can make with the ‘simpler’ ingredients on closing song ‘Find a Way To’, a staggeringly beautiful slow-burner built on a delicate piano melody which swells to a crescendo so doused in strings and harmonies that it’s not all that great a stretch to imagine St. Peter picking it as his soundtrack for people’s first approach to Heaven’s gates.

By now it is clear that Field Music are a truly special band, although it seems a lost cause to expect that they become the full-on household names they deserve to be. That is quite a sad thought, but it’s reassuring to know that no matter what pestilence, carnage or other general catastrophe the world may choose to chuck at us in the future, every couple of years until the end of time we can expect another exceptional record from David and Peter Brewis.

A Day with the Homies