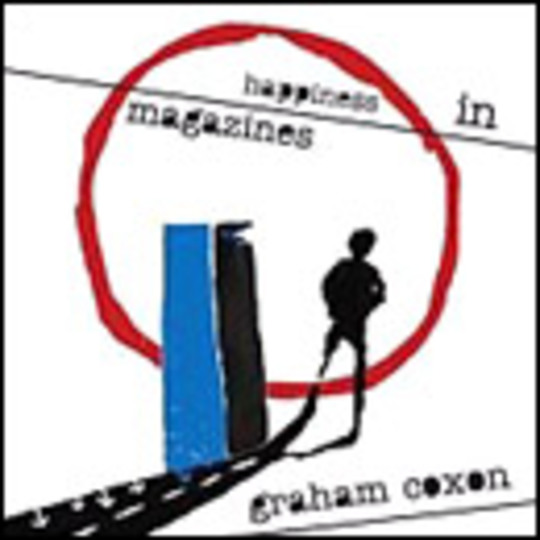 Graham Coxon is no longer unwell

'Spectacular', the first song on 'Happiness In Magazines' - Graham Coxon's fifth solo album - serves as a concise, explosive statement of intent for everything that follows. Besides being a crystallinely produced, hopelessly catchy slab of dumb, pounding riffs and exuberant yelling, it proudly wears the badge 'classic pop song' on the sleeve of its thrift shop jacket. After all, it's about a boy wanting to make nasty with a girl and what are themes more eternal than that? This take on seemingly straightforward lusting constitutes a radical departure from the introverted, complex and very, very drunk Graham Coxon we are accustomed to. However, when it transpires that the object of his affection is just a picture on his monitor and, therefore completely unavailable, you realise you're still in Coxonland, a difficult place where modern life gets in the way of a happy life. The only real difference is that the juxtaposition of a simple love song with the alienation of the modern world is the type of conceptual conceit previously eschewed by Mr Coxon in favour of instinctual, one-dimensional simplicity. 'Spectacular' confirms in two and a half rollicking minutes that the former indie side-kick really is ready to take centre stage.

'No Good Time' is another type of song Coxon hasn't sung before. Successfully satirising the meaningless hedonism of the glitterati stereotypes that clog the party scene, it provides further evidence of just how much more stable Coxon has become since the years of boozing and painful recovery. Previously too self-absorbed to turn his anger outwards, he was a vocal opponent of all things satirical after 'The Great Escape' (memorably describing 'Country House' as being '_so hook-laden it made you want to shit_'). His solo work testified to a general misanthropy, but the pressing business of self-loathing occupied all his creative energies.

This is no longer the case. At one point he deploys a whole lifetime of sartorial snobbery (a mod, then an art-student, then a skater - it's enough to make your eyes bleed) against the graphic designer "_who couldn't look no finer, in his eyeliner and his Silas jeans_". Yes, it's bitchy and superficial, but it feels good. Furthermore, 'No Good Time' is prevented from descending into petty sneers by the characteristically edgy hint of madness in the chorus; these partygoers aren't merely having a bad time, they're "_slowly suiciding in a tiled cell_". The emotive style of critique Coxon has developed is more immediate and effective than the similarly-themed, concept-heavy 'Death Of A Party' from Blur's 'Blur'. And it rocks.

However, Coxon falls down badly on another social commentary piece, '_People Of The Earth_'. You can actually hear him overstretching himself here. The rabid, speaker's corner style delivery and fashionably distorted vocals come across as nothing more than hollow sloganeering, belying the song's origins as a poor cousin of labelmate and cohort Billy Childish's '_You Are All Phonies_'. Not to mention that there are eminently better targets in the current political climate than school children and people who eat burgers; their only crime is a bit of apathy.

Then there are the heartbreak songs, 'Girl Done Gone', '_Bittersweet Bundle of Misery', 'All Over Me',_ 'Bottom Bunk' and '_Are You Ready_'. Of these, current single 'Bittersweet Bundle?' must rank as the most accomplished expression of Coxon's pessimistic but sweet romanticism to date. Set against a backdrop of naïve guitar brilliance (copyright G.Coxon), handclaps and breezy keyboard licks, the song delivers a list of contradictory and, yes, bittersweet statements about a troubled love affair ("_I find the fact that you're unkind quite appealing"; "I love the way we fight right through the night_"). In essence it's a big slice of aural honeycomb, dripping with the tenderness and lush regret that only increasingly distant recollection can allow.

Of the others, 'Girl Done Gone' is a standard blues affair that takes a surprising turn by degenerating into primordial sludge rock. 'Are You Ready' is an unsettling swathe of Western guitars and eastern strings, which lyrically inhabits the unsettling terrain between serenading and morbidly obsessing over a lover. 'Bottom Bunk' is a track that, musically, wouldn't be out of place on '_The Kiss Of Morning', sounding similar to 'Just Be Mine_'. It is, however, a charming story about a problematic holiday and has a pretty good joke about wanking. 'All Over Me', along with the fuzz-bass driven 'Hopeless Friend', features some of the most exciting musical innovations on the album. It has shimmery, late sixties-Beatles style strings, keyboards and squalls of digitally decaying white noise. All this lush instrumentation underscores a tale of fainting in the shower, injuring himself and terrifying his lover who has to "_wash his head in bright red water". When Coxon croons "I was free, swimming in light_", he is venturing further than ever before from his normal musical sphere. His tremulous vocal harmonises with the high strings, enhancing the chilling ambiguity of his flirtation with oblivion.

'Ribbons And Leaves', the album's closing track, sees Coxon looking beyond his own relationships, but in a more reflective mode than the acerbic 'No Good Time' and 'People Of The Earth'. The song transcribes an escapist voyage of the imagination, portraying a haunted suburban scene that seems to be populated by the author ("_In an old house in an old street / You found me and a TV_") and the ghost of a dead soldier, movingly characterised by his "old cap and tobacco tin" and the "_torn shirt that you died in_". Unlike 'Good Times', a similarly delicate piano-led ballad which closed, this soars above the pain of human relationships. The tenuous images created by the lyrics float on minimal piano chords so that you too want to disappear among the medal ribbons and dead leaves as the last chords taper into silence. It is an appropriately subdued note on which to end an album which traverses exhilaration, desire, despair and loss and sees a songwriter finally completely on top of his game.