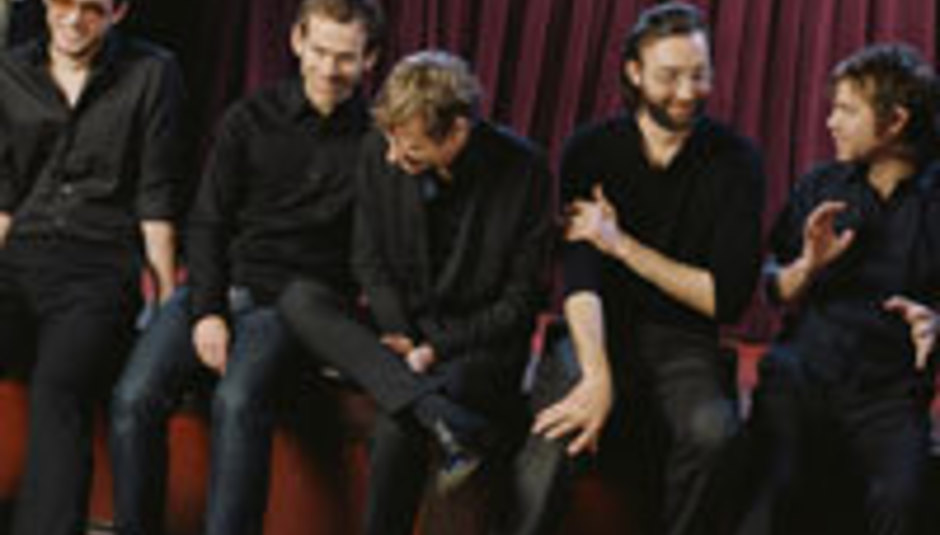 For Brooklyn quintet The National, this is the year of the festival. On the eve of their appearance at the DiS-sponsored Green Man (see our preview articles here), Guitarist Scott Devendorf talks about the great outdoors and their ‘Mr November’. (Article courtesy Big Issue Cymru)

“We've heard a lot of great things about Green Man from friends who live in the UK,” says Devendorf. “It's a small little festival that's off the beaten track and isn't at all like Reading or Leeds. Some of the big ones can be a bit intimidating, so it's going to be really nice to be far out in the countryside for a festival.”

With four highly acclaimed albums to their name, The National's 2007 release Boxer found itself riding high in many end of year polls, including DiS’s. Their sound has been described as an American version of Editors, a comment that can probably be put down to strong baritones fronting both bands and a lyric content full of dark fatalistic optimism. Having built almost their entire tour schedule for this year around the world's music festival season, what has it been like to play to thousands of people who may not have heard them before?

“It's interesting,” Devendorf laughs. “We enjoy it, that's for sure. It's fun to prove yourself if you want to and really, people have come along just to enjoy whatever music is being played. We enjoy that challenge but, at the same time, I guess when given a choice it's always nicer to play your own shows.”

With long lazy summer days where festival goers can enjoy the outdoors music experience and everything else that comes with party, does this hard-working band ever get the opportunity to chill and enjoy the same as everyone else?

“We really like to hang around but for how long depends on our schedule. If we're there for a while we love to check stuff out and get the feel for the place. We played a festival in Hyde Park recently and we had time to go around and check the park out, which we found really exciting.”

The National are an intensely thought provoking indie-alternative band and, as such, not the usual fare for the traditionally folk-orientated Green Man. So how did they end up on the bill?

“We met Iron and Wine at All Tomorrow's Parties at Minehead earlier this year, when we played on the same day as them. They told us about this Welsh festival and, as we were in the middle of stringing a few dates together, we thought we would love to play there. We're looking forward to seeing them again at Green Man.”

Festivals seem to be a different kind of animal in the United States compared to Europe. Having attained plenty of experience in the ways things are done on both sides of the pond, how does the musician think the two continents differ?

“The UK festival scene has been around for so much longer than that in America,” Devendorf says assuredly. _“In a way, it's a part of UK life, but it's much newer in the US. I think they are similar in their set up though and the successful US festivals seem to be based on the whole European style of doing things.

“There are only a few big US festivals,”_ he continues. “Austin City Limits is great, and so is Lollapalooza. We went to Coachella in Indio, California this year. That is one of the nicest festivals I've ever been to, even down to the grounds where it was held. The setting is unreal as it's in a desert area and it's held at a kind of a manufactured oasis in the middle, with mountains all around. The main way they differ is that US festivals are usually two days at most, while in the UK they are longer and people turn up to camp before it even starts.”

An accurate observation as the Thursday start this week to Green Man proves. Not usually an openly political band, The National have uncharacteristically climbed their soapbox to declare their active support for the Democratic candidate Barack Obama in the presidential elections. The campaigners have had t-shirts printed with the words ‘Mr November’, the name of a song from their_ Alligator _album, emblazoned across an image of Obama, referring of course to the end-of-year contest. With all proceeds going to the Democratic campaign, what do The National think Obama can do for America?

“We're hoping that he can be the complete opposite of how things have been the last eight years, under George W Bush. I just think that people are really tired of what's happening are really excited by Obama as a candidate.”

Is the newly politicised band behind Obama the man, or simply because he is the Democratic candidate?

“It is because of him. Yes, we're hoping that a Democrat will get into the White House, but realistically we only had two choices,” Devendorf says, alluding to the defeated nominee but hopeful running mate, Hillary Clinton. “But I don't know we would have made a ‘Mrs November’ t-shirt?” the sometime graphic designer says with a smile.

“I don't know if this is right or wrong but I think people are generally excited about him, his personality, and he seems like an interesting, intelligent, well-spoken person and we are excited about him. There has been criticism saying he's just a personality but I don't think that's true. We wanted to do the shirt both because we think he is the candidate and we think he's the right person for the job.”

With all five members originally from Ohio, one of the three traditionally decisive states, the reason for their new public stance is obvious.

“It's not going be a significant contribution, but if we can make some kind of small difference, even if it's just enough money to make another advertisement or something like that. Also, along that same line we've been trying to organise a benefit in Ohio. We just want to find a way of saying, _‘Hey we're from this state and it has made some questionable decisions in the past’.”_

However the American public swings in late autumn, The National intend to continue enjoying their fresh-aired tour for the rest of the summer.