You Are The Quarry 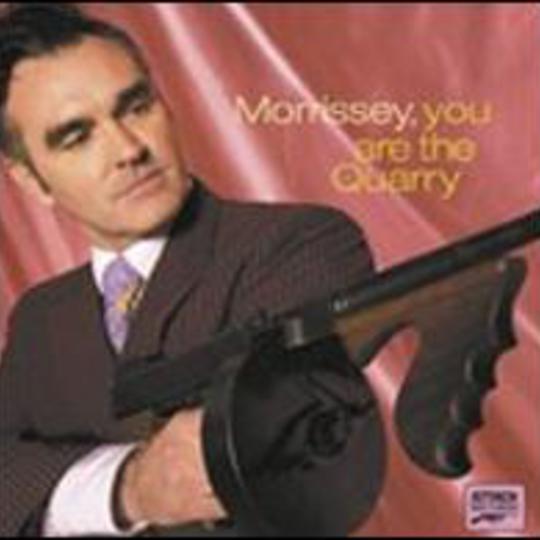 For over a decade I’ve dreamt of a time when to be a Morrissey fan was not to feel shameful, racist or downright stupid for investing such determined faith in ever decreasing returns. ‘You Are The Quarry’ may be his first release in seven long years, but de facto it’s Steven Patrick’s first in ten: 1995’s ‘Southpaw Grammar’ and its follow-up, ‘Maladjusted’ were so laden with clangers that he was lucky to escape a lawsuit from Oliver Postgate as well as that Joyce character.

It’s also the first without the smear of – in Prince parlance – contro-ver-see. The Smiths' split cast an ugly shadow over solo debut, ‘Viva Hate’; the making of ‘Kill Uncle’ was an overlaboured debacle and ‘Your Arsenal’'s glorious glam fuzz was besmirched with the Madstock fandango. Like other incredulous events of that the early nineties (did Kurt Cobain not die, but find god, undergo facial surgery and become a tele-evangelist? Was Bill Hick’s death a CIA plot? And where the hell is Richey Edwards?) I still muse on the motivations for that ill-thought exercise.

To recap: Morrissey took to the stage, gold lame top billowing against a Union Flag to prance around singing ‘The National Front Disco’. He was ceremoniously bottled by the knuckle-dragging thugs he knew would be there and toppled in words by the music press. If, in consonance with his character, this was meant as a camp send-up of far-right hypocrisy (simultaneously homoerotic while deeply homophobic) this was brave. But very, very dangerous. Racial tensions were high, the Union Flag was still the property of the BNP who were soon to take their first council seat in the Millwall by-election. Now was not the time for complex performance art. The “old, smelly NME” plotted regicide. After putting out the politically anodyne but aurally sumptuous ‘Vauxhall & I’ Morrissey languished in exile in LA.

Stewing for ten years, ‘You Are The Quarry’ finally answers the haters, the Britpop chancers, and the ‘Northern leeches’ after the Morrissey/Marr treasure chest.

Teaser single ‘Irish Blood, English Heart’ is as burly as his slab-of-concrete frame: a triumph of both lyrical wit and - surprisingly - sonic brawn. As his band lay into a taut melee of stuttering hooks and whipcrack beats, El Moz, his tongue flicking like a crop in the wind, lashes the Mother of Parliaments, the sell-out to constitutional monarchy of Oliver Cromwell and why being patriotic doesn’t necessarily align you politically with Jean Marie Le Pen. Well, _kinda _.

Exile has also bred sentiment for his adopted London home. _ ‘Come Back To Camden’, a cut ‘n’paste contrivance of _‘Everyday Is Like Sunday’ and ‘Will Never Marry’, is nevertheless a swooning ballad in the style of French chanson, though shorn of frenzied angst.

Deftly straddling his fan demographic is pear-drop sweet ‘America Is Not The World’ and the rough ‘n’ tumble of ‘The First Of The Gang To Die’. Equating personal greed with Uncle Sam’s rampant imperialism (“America, your head’s too big/because America, your belly’s too big”) will surely strike home to the NAFTA-shafted Mexicans, while in the latter, instead of the “Dallow, Spicer, Pinkie, Cubitt” of ‘Vauxhall & I’ he romances on the crimes of Hector and his Hispanic gang of Pretty Petty Thieves.

Speaking of uncles, when the notoriously sexual-ambivalent Moz broaches the icky subject of bedroom sports, things become a little Uncle Fester. “Close your eyes/and think of someone you physically admire” he slavers over the lush “Let Me Kiss You” while in ‘I’m Not Sorry’ there’s “a Wildeman in my head”. Not that you expect the man, 20 years on, to be screeching “I need advice!/I need advice!/Nobody ever looks at me twice!” from a rented room in Whalley Range, but from the Catholic guilt smeared ‘I Have Forgiven Jesus’, it’s clear he doesn’t know where to put it, or if he wants to put it anywhere at all.

The Joyce vs Morrissey/Marr court case is exorcised on the Eminem-does-musichall of ‘The World Is Full Of Crashing Bores’ (“lock-jawed popstars/thicker than pig-shit/nothing to convey”) and the effervescent sure-fire pop of ‘How Can Anyone Possibly Know How I Feel?’. Fuelled by apoplectic hatred of uniformed dictators and the sycophantic slags of fame, Morrissey delivers the most stinging couplet of the LP with a clenched fist: _ “I’ve had my faced dragged in 15 miles of shit/and I do NOT LIKE IT”_.

More painful than the NME overthrow and the “devious, truculent and unreliable” pummelling at the hands of Judge Weeks was his cultural irrelevance amidst the flag waving chutzpah of Britpop. “Losing in front of your home crowd” he lamented on ‘Boxers’. And not for nowt. The double irony of Select effectively initiating the whole back-slapping festival by putting Dame Brett Anderson in front of the Union Flag a few months after Madstock must have smarted. “The teenagers who love you/They will wake up and kill you” he assures on cathartic closer ‘You Know I Couldn’t Last’. Compared to the buzz-saw ferocity of ‘Vauxhall’s’ ‘Speedway’ or the existential fuzz of ‘Your Arsenals’ ‘Tomorrow’, it’s a rather flagging ending, but instead of withering into tragedy, ‘You Are The Quarry’ sees Morrissey back in the ring, lean, limber and fighting fit. He has to be.

Fear Before The March Of Flames